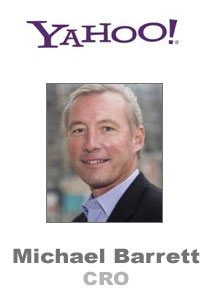 Just over a year ago, supply side platform AdMeld announced it was being sold to Google in a deal estimated at $400 million. With the integration complete, former AdMeld CEO Michael Barrett is now preparing to take on the role of chief revenue officer of Yahoo.

The portal has experienced a lot of upheaval the past two years, with changes in top executives and in the structure of its display sales team. Barrett will come into the job, which reunites him former Fox Interactive Media colleague Yahoo interim CEO Ross Levinsohn, as Facebook and Google vie to dominate the display marketplace.

Despite the challenges, Barrett told AdExchanger that he believes that Yahoo’s enormous audience — comScore’s May 2012 rankings has Yahoo’s sites second only to Google’s with 167 million uniques — and its content offerings offers a perfect platform to test his view that direct, premium ad sales can work hand-in-hand with real-time bidding environments.

AdExchanger: After completing the sale of AdMeld to Google not that long ago, why did you decide to  join Yahoo?

MB: There were two reasons: for the last four years, I was working with some of the best, largest premium publishers on the web through AdMeld and saw directly how the whole biddable media, programmatic buying, platform buying was impacting their business.

I always thought there was a way to tie both biddable media and direct, premium, branded sales team together. And looking at Yahoo, with the enormous audience that they have – and programmatic buying is all about finding the right audience – and couple that with the great content they have, it was a unique opportunity to test the theories that we were building at AdMeld and at Google.

Had you thought of finding a new role within Google following the sale? Or had you always planned to look elsewhere for the next opportunity?

I was grateful for the way Google handled the acquisition and with that task accomplished, it was either stay with Google, which is a terrific place to work, or see what comes up. You can’t time these things. But when Ross called up, it was something that was too big to pass up.

What are your initial goals in terms of addressing Yahoo’s challenges as you step into the CRO role. Is it continuing to rebuild the sales force? Or is it something else?

These things are more easily answered once you’ve spent a little time in the chair. But my sense going in is that Yahoo has a lot of really smart, talented, passionate people there. Like anything, having a fresh set of eyes to take a look at where the biggest growth areas are and try to take greater advantage of that. At the same time, you want to be able to deliver the kind of deep, custom, integrated brand opportunities that Yahoo is known for. And as I said, focusing on bridging the direct sales and programmatic method is a definite goal.

AdMeld did a lot to promote the use of private exchanges by premium publishers like NBC Universal and others. Is there value to that offering for publishers apart from otherwise ordinary real-time bidding platforms? Or is it just a good way to get publishers used to the idea of ad exchanges?

I think the product evolved from the first ones we sold. It was a really smart way to get a big fence-sitter to work with programmatic buyers in a controlled way. I don’t think that’s ever going to change. Publishers are very aware of channel conflicts, direct relationships with the buyer and if they would have their druthers, they would rather not have any third party buying from their sites.

What’s been disappointing for the industry is the lack of support for higher CPM, branded advertising deals to be plugged into programmatic buying. But I think that’s changing. Publishers, like Yahoo, that have large audiences and great content, are better able to take advantage to take both brand dollars and performance-based dollars from the marketplace. The dollars are just now starting to arrive, and publishers that started private exchanges early on will see the benefits first as well.

One of the challenges that Yahoo and other traditional display leaders face is from the flood of inventory that comes from social media in general and Facebook in particular. What’s your take on the impact the Facebook Exchange, which was announced two weeks ago, would have?

I don’t know all the nuances of the Facebook Exchange, so it’s hard for me to judge. But anytime someone makes buying easier, one of two things can happen. Either the tide is going to rise and everyone’s going to go along with it, or the pie stays the same and they need a bigger slice of it. My sense is that it’s the former, not the latter. You’re talking about something that’s so different from everything else that’s out there, even if it were similar, you’re still talking about different ad units, ways of tracking. I think it’s going to attract more dollars to real-time bidding and not cannibalize everything else.