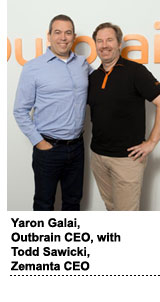 Outbrain acquired native DSP Zemanta for an undisclosed sum Tuesday. The deal will bring together Outbrain’s scaled native supply with Zemanta’s demand, laying the groundwork for Outbrain to position itself as a leader in the still-nascent programmatic native ecosystem.

“Most of the media-buying tools used by marketers were made for a display world and are not optimal for ​​native executions,” said Gilad de Vries, SVP for strategy at Outbrain. “With a platform like Zemanta, which has access to the largest native supply pool in the world, marketers will be able to scale their native efforts much more effectively at scale than anywhere else.”

Zemanta has raised just less than $9 million since it was founded in 2007, in contrast to Outbrain’s $194 million over the same period. Zemanta sold some of its publisher-focused technology to Sovrn last September for an undisclosed sum.

Zemanta buyers will continue to bid across more than 30 native supply platforms, including Outbrain. The company can optimize for reach, frequency and user engagement, and it was the latter capability that attracted Outbrain. Post-acquisition, Outbrain will connect its interest graph to Zemanta’s DSP, allowing for more unique targeting opportunities.

Outbrain will also bring Zemanta, which is based in Slovenia, into more countries, mirroring its own 15-country footprint.

Outbrain buying a DSP makes it look a bit more like Google, the display advertising leader that successfully unified a DSP with a SSP. Like Google, Outbrain said it envisions its growing programmatic business and ad network-style business living side by side.

Those who value Outbrain’s capabilities around personalization, interest targeting and lookalike targeting can work with the company directly, while those embracing programmatic native can use their own data to buy via Zemanta’s DSP.