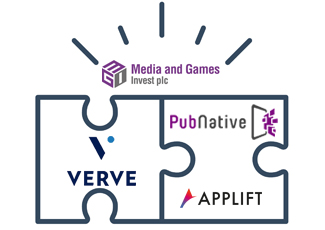 The new unit, announced on Tuesday, is called Verve Group, and comes along with a mini reorg.

Sameer Sondhi, previously SVP and GM of global business development at InMobi, is joining as chief business officer of the unit and will report to Remco Westermann, CEO of MGI and Gamigo, MGI’s game publishing subsidiary.

MGI has been on a buying spree, with 11 ad tech and media acquisitions over the past three years, including user acquisition platform AppLift, mobile SSP PubNative, digital marketing agency adspree media (formerly SevenGames Network), quiz app TVSmiles and, most recently, Verve, all of which were previously housed under Gamigo.

Tom Kenney, Verve’s CEO and founder, had already left following the acquisition, and Maor Sadra, AppLift’s CEO, will be transitioning out of the company.

The Verve and PubNative platforms are already fully integrated into a single open source software development kit, which is now in beta testing.

But Verve Group will also serve “as a kind of ‘mothership’ to dock new and further acquisitions,” said Westermann, who noted that MGI is already in active discussions for further M&A.

Unrelated to the restructure, the US teams took 20% pay cuts last month due to negative revenue pressure caused by COVID-19.

And unrelated to COVID-19, Verve recently laid off a handful of employees due to redundancy, although it’s also hiring despite the economic conditions. Verve recently added 10 new salespeople, and there are still open positions on the sales and tech side.

Although it’s “tough times for the entire industry,” Sondhi said, Verve is in a decent position thanks largely to its strength in gaming and brand-based clients that also spend on performance marketing, he said.

The performance business is back to growth in many markets, Sondhi said, and Q2 isn’t turning out to be as bloody as expected.

Gaming, in particular, is “a great space to be in” right now, Westermann said. Gamigo has seen a significant uptick in new players and increases in player activity and spending. Gamigo has also upped its own marketing budgets to take advantage of the influx of cheap inventory generated by people at home spending more time in games.

“In times of economic crisis,” Westermann said, “gaming normally does quite well.”