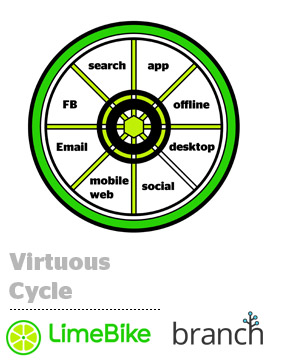 Branch is the first MMP added to Facebook’s marketing partner program since around 2013.

When the company launched in 2014, it focused on deep-linking across owned-and-operated content – for example, tracking clicks and installs coming from organic sources – to help users determine which channels brought in the most valuable users.

Through Facebook’s MMP program, Branch can access performance data across devices for campaigns with app-related objectives, which it dedupes against campaign results from other ad networks and channels.

But, like any marketing partner, Branch only has visibility into what Facebook decides to pass back. When a user installs an app or takes an in-app action, Branch sends the IDFA or Google ad ID to Facebook, and Facebook says whether it touched that user.

Cross-channel measurement – in particular, figuring out how to measure ROI on paid versus organic across channels – is the headache of all headaches for a mobile publisher like LimeBike, a California-based bike-share app that’s beta testing Universal Ads.

Like any app in growth mode, LimeBike spends and tests across nearly every online channel, from Facebook, Instagram and Snap to Google AdWords, YouTube and offline, including transit, radio and events. The result is a fragmented view of how users engage with its marketing.

“The customer journey these days is hard to measure – people bounce around a lot,” said Noah Bond, a growth manager at LimeBike in charge of performance and rider engagement strategy. “We need to understand that journey to get an accurate sense for each channel in terms of ROI.”

Branch maintains a deterministic identity graph for the roughly 30,000 apps that use its deep links monthly. When someone clicks on a link inside a LimeBike email, visits Facebook within a browser, clicks on a search ad in Safari and then downloads the app, Branch can tell that those actions were taken by the same person.

This is different from what a Facebook measurement partner like AppsFlyer, Kochava or Adjust provides because it goes beyond tracking installs, said Branch CEO Alex Austin.

“App attribution was born out of a need to drive installs, and that’s fine when all you have is an app,” Austin said. “But now there’s a more complex journey to take into account, and the fact is that consumers are touching many different browsers and may only end up in an app after lots of engagement beforehand.”

Being able to measure all the touch points in a campaign makes the difference between blindly spending money and having measurable ROI, Bond said. Since testing Universal Ads, LimeBike is getting more accurate data on how channels are performing and whether the cost of acquisition each provides is supportable over the long term.

“I can be more confident when I go to the CEO or the VP of marketing because I can say, ‘Based on these returns on these channels, we should increase our marketing budget to this or allocate a certain amount of spend to that,’” Bond said. “Before, we were just estimating based on the conversion rate of people who downloaded our app compared with those who became riders.”