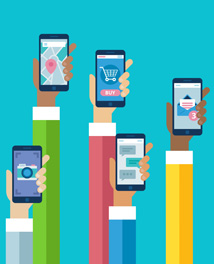 The more the merrier.

App attribution company AppsFlyer has a late breaking addition to its $210 million investment round, which closed in January: Salesforce Ventures.

Although Salesforce is only taking a small percentage of AppsFlyer as part of the round extension – less than 1% of the company, according to AppsFlyer CEO and co-founder Oren Kaniel – the investment is strategic.

“Shifts in the marketplace create challenges, but they also create opportunities,” Kaniel said. “And we – and Salesforce – see a lot of opportunity right now.”

The ongoing COVID-19 pandemic and Apple’s forthcoming IDFA changes as part of iOS 14, which Kaniel facetiously refers to as “COVID 14,” both happening at the same time has created an existential crisis for app developers and for the mobile measurement industry.

But this is a case where rather than souring investors on the mobile attribution space, uncertainty is leading them to make bets on which companies will end up being the resilient ones.

After Apple made the announcement in June about its plans to require developers to get an opt-in in order to collect and use the IDFA, AppsFlyer immediately allocated nearly 100 employees to focus almost exclusively on solutions for iOS 14, Kaniel said.

In September, AppsFlyer released a simulation dashboard for SKAdNetwork and a new SDK of its own with support for the SKAdNetwork API, including the ability for advertisers to flexibly configure their conversion values (which they only started receiving very recently from SKAdNetwork, it must be said).

In cases where the IDFA is not available in the publisher app, the advertiser app or both, AppsFlyer has a solution for performing what it calls “privacy-centric attribution” using probabilistic modeling.

“A soon as Apple announced the changes, it was very clear that this would be a major challenge for all marketers and app developers without exception,” Kaniel said. “Our job is to try and mitigate that challenge with software.”

In addition to investing in iOS 14 readiness, AppsFlyer has been building products at a steady pace this year, including a tool that unifies marketing cost and attribution data, an incrementality measurement product and analytics for App Clips, which is a new feature from Apple that lets users download small snippets of an app without installing the whole shebang.

AppsFlyer will use the investment to build products, do more hiring and perhaps acquire companies that do advanced measurement and predictive analytics.

Although the pandemic derailed acquisition plans this year, “there are many interesting technologies and companies out there,” Kaniel said, “and we’ll explore the market.”

AppsFlyer has more than 1,000 employees globally, and will continue hiring in 2021 across all roles, including engineering, support and sales.

“There’s no one place where I can say, ‘We’re good enough here,’” Kaniel said. “We’re hiring for everything.”

The company hit $200 million in annual recurring revenue in October, a 33% year-over-year increase. Although AppsFlyer is not yet profitable, Kaniel said it’s “in the area of break even.”