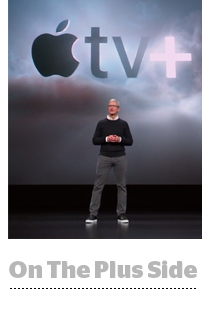 Apple entered the streaming and original content space with a flourish at a special upfront-like event in Cupertino on Monday. But while Oprah was there, advertising was not.

That one’s ad free, too.

There was no mention of how much either subscription service will cost.

Apple is expected to spend somewhere around $2 billion on shows this year in an effort to catapult itself into the streaming big leagues with a slate of originals: documentaries from Oprah, an “Amazing Stories” reboot from Steven Spielberg, a drama starring Reese Witherspoon and Jennifer Anniston, an anthology series from Kumail Nanjiani, a kids show through a partnership with Sesame Workshop and a bunch of other new programming.

“Apple sees the Netflixes and Amazons of the world doing well, and they want a piece of that cake,” said Bertrand Quesada, CEO and co-founder of Teads.

But are these offerings really a Netflix killer? That’s a bit extreme, said Tom Edwards, chief digital and innovation officer at Epsilon.

Apple is attracting a lot of high-profile talent for Apple TV Plus, but it’s quite a grab bag of content, and $2 billion, while a lot, is still only a fraction of the $13 billion Netflix spent on original programming last year.

“Apple is focusing on creating programming that will create affinity within their services,” Edwards said. “It’s a first step to not only control the navigation of content, but also become a destination.”

Because as flashy and star-studded as Apple’s streaming launch event was, the real story is about how Apple is positioning itself as sort of a Sherpa of content, Edwards said.

“They want to be the ‘Google Search’ of entertainment,” he said. “This keeps their hardware and services sticky throughout.”

Apple spent a lot of time talking about its recommendation engine, which the company took pains to point out multiple times relies on a combination of human curation and on-device processing, so that Apple isn’t actually collecting any data and that data can’t be made available for ad targeting.

“What came through loud and clear is Apple’s focus on allowing the consumer to ultimately control their entertainment options,” Edwards said. “By providing bite-size subscription services across their ecosystem, they gain a consistent stream of revenue that is scalable and minimizes hardware recycles.”

Services revenue has become a high priority for Apple over the last year in the face of flagging hardware sales, the iPhone in particular.

In that vein, Apple rolled out two other subscription-based additions to its services offerings on Monday: a $9.99 version of Apple News called, what else, Apple News Plus, that provides access to more than 300 magazines, and Apple Arcade, an ad-free gaming service which hasn’t been priced yet. For good measure, Apple also announced its own credit card through Apple Pay.

The rapid growth and adoption of Apple services is directly linked to their occupying prime real estate on more than 1 billion active devices. “This has played a huge role in the rise of Apple Music, and Apple News continues to drive significant traffic to publishers,” Greenberg said.