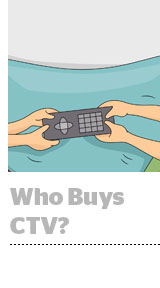 Years ago, TV buyers didn’t bother with connected TV (CTV) because it offered little benefit for a lot of hassle.

“Digital players were the earliest adopters. Because it was TV-like, everyone wanted to get into the video game.” said Gibbs Haljun, total US investment lead at Mindshare.

But young viewers leaving linear TV changes that calculus, and today, TV buyers are rebranding as “video investment” teams and swooping in to control CTV.

Both groups are showing off their expertise – the economic prowess of TV buyers and the sophistication in targeting, measurement and attribution of digital buyers – to claim the rapidly growing CTV market.

At stake is access to CTV inventory. While CTV only makes up about $2 billion of the $70 billion TV market, according to GroupM’s global president of business intelligence Brian Wieser, it’s growing fast. If digital buyers can’t purchase CTV now, they’ll lose the potential to control billions of dollars of advertising spending.

“Linear buyers are realizing the loss of reach in key demos. There are audiences, particularly young audiences, they can reach at scale on OTT,” said Seth Walters, VP of demand partnerships at Roku. Some Roku campaigns improve incremental reach by 9% to 10%, an enticing figure for TV buyers.

“So much of TV consumption happens against heavy TV viewers who are watching seven to nine hours a day, said Hulu SVP of ad sales Peter Naylor. “We reach a lot of light TV viewers that watch selectively.”

Compared to upfront linear TV buyers, CTV CPMs cost more. But to digital buyers, the CPMs are roughly equivalent to online video, meaning they’re less likely to push hard on price. Or a digital buyer might not even realize the inventory can sometimes be secured for far less with a different buying method (or a bulk, upfront deal).

Siloed buying often means that digital teams pay too much for CTV.

“If the digital and TV buyers don’t communicate, there is potential for different prices on CTV depending on who buys it,” Scheppach said. “This should be something clients should be asking about.”

Since entering the CTV market, TV buyers have exerted their pricing power, making sure the same inventory doesn’t cost more when digital teams buy it. “We have done a good job over the past three to four years cleaning up places where there were major disparities for no good reason,” OMD’s president, Christopher Geraci, said.

Even though digital buyers will pay more for CTV, they often can’t secure ad inventory. Unlike online display, CTV supply is constrained, a big problem for digital buyers hoping to get their share.

A number of factors limit supply.

Although 15% of total viewing occurs on CTV, half that viewing happens on ad-free Netflix, Wieser said.

Virtual MVPDs, which typically run lighter ad loads, can only sell a small portion of the ad inventory per viewing hour. Millions of households may use Sling, for example, but Dish can only sell a fraction of those commercials, with the rest going to programmers.

The smaller pool of inventory means that digital buyers who try to add many targeting layers end up with an audience smaller than their budget.

“You have to be more mindful in OTT about how much segmenting you do,” said Wavemaker Global Chief Platforms Officer Oleg Korenfeld. “TV buyers still go after age and gender, and that's basically it. As a digital person, we are spoiled in terms of the data segmentation we can do. The reason we can layer on so much data is because of how many people there are.”

Other CTV inventory gets bundled into upfront deals for TV buyers, taking it off the market before digital buyers can access it.

During the upfronts, some programmers offer to deliver their audience across both linear TV and an OTT full-episode player, said OMD’s Geraci. TV buyers agree to a percentage of the audience that can occur on CTV, which locks out digital buyers.

Plus, some short-form video inventory, like comedy clips from a late-night show, also gets snapped up in the upfronts.

Of the two CTV heavyweights, Hulu sells to TV buyers via upfronts. Digital buyers often complain that Hulu is sold out of inventory. Roku offers better availability to digital buyers. Because it doesn’t produce original content, doesn’t host an upfront, but takes meetings during that time as it tries to win more dollars from TV buyers.

After TV buyers make upfront and direct deals, the little inventory that remains is often hard to find, especially for programmatic buyers. For instance, Hulu only sells inventory via private marketplaces, meaning digital buyers can’t find it in the open exchange. Many programmatic buyers purchase CTV as part of a broader video campaign, so they’re not fully versed in where to source CTV inventory programmatically even when it does exist.

The complexities of CTV require a digital background

CTV’s precision offers a way to break away from linear TV’s panel-based measurement.

Digital buyers trust ad servers more than Nielsen panels, and aren’t as caught up in getting Nielsen equivalents for ads delivered to individual households.

Digital buyers also know how to work across walled gardens and stitch together disparate data. CTV measurement today is nascent and comes from multiple sources: data from smart TVs, hardware, software as well as new solutions from providers like Nielsen and Comscore. Hulu works with 20 different measurement providers, for example.

TV buyers don’t know as much as digital buyers about how to protect themselves from bad data or bad content.

For example, if a single man watches “Dance Moms,” will an algorithm wrongly assume the viewer is a mom with young kids, potentially polluting the data? Haljun asked. CTV buyers need to be able to analyze and poke holes in probabilistic targeting models that might make the wrong inferences.

Having lived through the chaos, fraud, lack of transparency and loss of context in online display, digital buyers are anxious not to see those same mistakes repeated in CTV. They can help keep CTV clean.

Hulu positions itself as a “risk-free area of digital,” Naylor said, because it only sells viewable ads and doesn’t sell on open exchanges. But outside of the top CTV apps is a murky hodgepodge of content, and the lure of easy advertising money will draw bad actors.

Ad networks run by CTV distributors tack on nontransparent fees and keep buyers one step away from the programmers. Many buyers would prefer to buy ads directly from programmers, but today's distributors hold the addressable CTV cards. These CTV ad networks can operate like walled gardens, yet another area digital buyers know how to navigate through years of experience.

So while digital buyers and TV buyers might be at war to claim CTV inventory, a healthy ecosystem will rely on both sets of buyers working together and using their respective skills to complement each other.

After all, digital buyers understand the data, targeting and attribution that makes CTV new and exciting. And TV buyers' control on price and reach can make CTV a lot more economical.