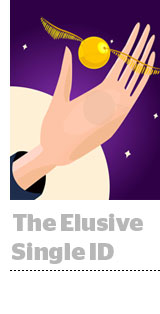 You know stuff is getting real when the consortiums start forming consortiums.

Over the past two years, two scaled initiatives have emerged to build a common ID that would reduce data loss, tags on page and site latency issues resulting from cookie syncing across dozens of ad tech companies.

One is Advertising ID Consortium, led by AppNexus, LiveRamp, The Trade Desk and Index Exchange with the backing of more than a dozen other ad platforms. The other is DigiTrust, a federation of twenty-odd publishers and platforms that is now overseen by the IAB Tech Lab.

Now the two groups are taking an important step by integrating their cookie IDs within a single “open identity framework.” All consortium members from across both groups have agreed to standardize on one of three domains: the Open Ad ID on the AppNexus domain, The Trade Desk’s Unified Open ID, and the DigiTrust ID.

For the Ad ID group, one motive in tying up with DigiTrust is to create an independent third option for ad platforms that didn’t want to standardize on a vendor-owned domain.

“Some prospective members wanted something that was truly independent and not associated with a specific ad tech entity,” said Mike O’Sullivan, senior director of product management at Index Exchange.

The problem of cookie syncing is specific to browser-based media. In the mobile app environment, a common ID already exists in the form of Apple’s IDFA and Android’s AAID device identifiers, whereas separate IDs have been the standard since the early days of desktop and mobile web browsers.

The rise of exchange-traded media has exacerbated the problem and lent an advantage to Google and Facebook, with their scaled deterministic identity solutions.

The Ad ID solution is now available for use, but challenges remain as the groups work through governance, payment structure and general issues of trust among members, many of whom compete with each other.

Additionally, GDPR has complicated the work of both Ad ID and DigiTrust, though the consortium partners say their solutions are compatible with the regulation’s consent regime.