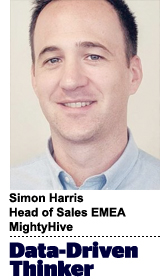 Today’s column is written by Simon Harris, head of sales EMEA at MightyHive.

Over the past 24 months, Apple has implemented increasingly aggressive iterations of Intelligent Tracking Prevention (ITP), with the feature now blocking third-party cookies by default. This has led the way for others to implement similar changes that will see third-party cookies eliminated from all major browsers by 2022.

Apple says its moves are solely to protect user privacy. Some suspect it’s waging a proxy battle against Google, but regardless of its motivations, Safari now blocks all third-party cookies, affecting how most advertisers target and measure the success of their online campaigns. This has created an advertiser imperative to double down on designing user experiences that establish a first-party data relationship with consumers.

While Apple targeted ITP on the open web, it is fair to say it turned a blind eye to its app ecosystem, where app developers had a relatively free rein with tracking. This all changed recently at WWDC20, when Apple announced a new form of tracking prevention for apps.

During a whistle-stop tour of its new iOS software, Apple’s manager for user privacy said, “Apple believes tracking should always be transparent and under your control … So, moving forward App Store policy will require apps to ask before tracking you across apps and websites owned by other companies.”

Apple gave an example of what the consent modal will look like within an app environment:

It is worth noting that the language in these consent requests can be customized. App developers who rely on advertising revenue will be affected, and this change will be felt by the ecosystem well beyond developers. SDK providers are worried that their products will be impacted just as location specialists were when Apple introduced similar measures for location sharing.

This fear is rational given Apple will also implement alert notifications on how apps are using data:

Many had long predicted that Apple would remove Identifiers For Advertisers (IDFAs) this year, and there is palpable relief that it did not, though how long this reprieve lasts is unknown. It may well be the case that just like ITP for the web, Apple limits tracking identifiers before implementing more aggressive measures.

So what should marketers do now, especially given there’s the threat identifiers are removed entirely?

Just as ITP for the web created an imperative to redouble efforts on first-party data, the same is true for these changes that are afoot in the app ecosystem.

It is likely that publishers will seek to encourage users to share other data, such as an email address either via a login or limiting features or access to those who share their email.

Given this focus, a first-party data collection program for advertisers so they can match against the data that publishers collect will be critical as it will provide an identifier to match against when the sun sets on IDFAs.

Advertisers will likely offer a slew of incentives to facilitate data capture, be that the already common access to special offers discounts or early access to new products and special events.

Looking further into the future and thinking about the mobile advertising ecosystem more broadly, we have seen with Chrome that in the context of privacy, Google typically lags Apple by 24 months. It may be the case that Android follows suit in the future now that the Android platform accounts for 72% of mobile users globally. Brands that are proactive now will be very well placed as this situation evolves.