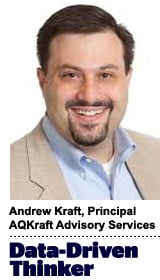 Today’s column is written by Andrew Kraft, a principal at AQKraft Advisory Services and a former ad tech executive, most recently at Maven and AppNexus.

Eighteen months ago, well before the recent protests against systemic racism, I was approached by a colleague at Maven about the terms blacklist and whitelist. My colleague was a Black professional – a leader at the company – who, after I had given an internal presentation on our whitelisting and blacklisting strategy, asked me to have the company stop using those particular phrases.

He explained that it didn’t matter that the etymology of the terms had nothing to do with racism. The term blacklist was first used in the early 1600s to describe a list of those who were under suspicion and thus not to be trusted, he explained. But regardless of the words’ origins, my colleague went on to impress upon me the discomfort he felt everyday living in a world where black was equated with bad and white with good.

It reminded me of an iconic BBC interview with Muhammad Ali in 1971 where he recalled that all the positive things he grew up with were white, from White Cloud tissue paper to the White House, while all the negative things, from the bad luck of a black cat to the term blackmail, were black. Nearly 50 years later, that linguistic measuring stick is alive and well.

The conversation changed the way I think of the language we use, for it was then that it truly struck me: Language creates culture far more than culture creates language. The words we use matter.

Long before any could claim that such a change in our phraseology was part of a political agenda or even a social agenda, I was impressed upon by this colleague to focus instead on the humanist agenda. We have industry jargon that actively makes people uncomfortable. There was no reason for us to be OK with that, regardless of the origins of a phrase.

We took a stand at Maven, changing blacklist to blocklist. We also looked at the term whitelist, and after a brief flirtation with the term includelist, we decided that allowlist was a more accurate representation of the meaning. In all of our client meetings, we described why these new terms were on our materials, and yet, while everyone seemed supportive, few other companies made the change in their own efforts.

While large companies such as Microsoft and Google have had similar loose guidelines for nearly a decade, few have made the change an actual mandate. Recently, however, there have been a number of calls to action on this and similar terms. The ad industry thankfully is responding. For example, in mid-June, MediaMath and SpringServe began to change their interfaces to move from blacklist to blocklist and whitelist to allowlist.

I have heard several people call these terms only “subtle forms of racism.” They are not subtle. They are a continuation of what Muhammad Ali – and my former colleague at Maven – talked about: a systemic stigma caused by using the same terms that describe the color of our skin as a delineation between good and bad.

The reason to change our terminology is simple. Regardless of our political leanings or our own ancestry, there is zero benefit to creating dissonance between our colleagues by continuing to use a set of outdated, polarizing terms. Rather, we can remove these and similar phrases from our environment and, through that, perhaps allow ourselves to create a new culture together.

Let there be no more bastion for inflammatory jargon. Use blocklist, not blacklist, and allowlist, not whitelist. Make the change.