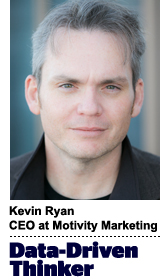 Hertz is really sore at Accenture – $32 million sore – over an allegedly disastrous website redesign that has culminated in a federal lawsuit. And that’s just the beginning, since Hertz is seeking compensation for damages in addition to the cost of services somewhat rendered.

I highly recommend reading the complaint document. It is very clearly written, the objectives are stated plainly and the responsibilities of both parties appear concise and properly structured. It is far more coherent than any RFP, response or creative brief I have seen in 20 years of working in digital marketing.

As Ray Zalinsky once famously said in the movie “Tommy Boy,” after Tommy Callahan copped to an auto air freshener overdose, “Good, you’ve pinpointed it, now the next step is washing it out.”

The Hertz action is a common corollary of a series of events that are set in motion when consulting houses seek to become what they oversee. No one seemed to care about the conflict of interest, for example, with the advisory business making it easy to fall into optimism bias.

Agencies had long eroded the trust relationship in very public and, some would allege, criminal ways. There was a very clear need for change.

The agency role was readily surrendered to consulting houses because they offered good advice from impartial senior people. Agency holding companies waved buh-bye to independence when they – among other things – became media buyers and sellers.

Consulting houses were free to give advice and critique the agency work because they didn’t have to worry about running disparate and quasi fiscally independent – yet somehow in the same brief – media and design shops. Even without managing the complexities of post-buyout culture transition, these internal units are constantly at war with one other over creative preferences, which technologies to use and, ultimately, how to implement.

If only it were less complicated

Since the universe of technical assets is so vast, tech firms tend to go with what feels most comfortable. Or, in some instances, an agency will select wildly complex technical assets that will make the client dependent on the agency for implementation and maintenance, a practice known as retention by incarceration. The strategist over this process must decide how best to manage complex selection conflicts between client and agency. Conflict resolution is an easy proposition when you are a neutral third party, but it’s something else entirely when everyone is on the same balance sheet.

Brands turned to consulting houses to oversee and evaluate agencies, thereby providing independent strategic direction and oversight – something decidedly missing from agency relationships. Consulting houses spent years looking at proprietary agency sales and account management tactics via access to all kinds of information that would never be made readily available to a competitor. This access point placed them in a very good position to critique each entity’s efforts, but the flow of intelligence stops abruptly when you become a known competitor.

The sad truth in massive projects like Hertz’s website redesign is that delays, false starts and technical dead ends are the norm, and it’s really hard to say this is just an agency or consulting house problem.

If only the truth were easy

These problems are everywhere in the business, and a lot of times we are measuring success in degrees of failure. One of the greatest brand managers I ever knew used tell his internal people, “When the agency fails, you failed. Don’t come to me and blame the agency.” Brands have to own their end of this large-scale craziness, and they can do that with a few simple self-discovery thoughts.

The most coveted and inscrutable power seat in the consulting world is one that is recognized for bringing value through a strategic contribution. Why anyone would want to dilute that with miles of tactical deliverables is beyond my comprehension.

Nietzsche called this one when he said something about not becoming a monster while battling one. There was also a missive about what happens when you stare into the abyss, but I wouldn’t know. I wasn’t able to view Nietzsche’s cookie policy from Leipzig, because the page wasn’t rendering on my fablet.