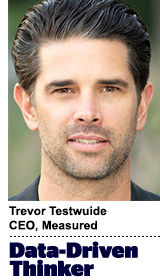 Today’s column is by Trevor Testwuide, CEO and Co-Founder, Measured.

With less customer tracking and online data collection, advertisers are rethinking their ad targeting and attribution methods. The time has come to revisit a measurement approach that many marketers cast aside decades ago.

Geo-testing, once the gold standard of advertising measurement, fell out of favor as the internet gained popularity. The allure of digital marketing – insights so granular that advertisers could track the behavior of individuals as they traveled about the internet – relegated geo-testing to the role of a trusted, old-school measurement method for “non-addressable” campaigns.

Nowadays, even the MTA diehards have conceded that attribution tracking across the open web is not feasible. Meanwhile, in-market incrementality testing and experimentation on digital channels has gained traction as a measurement alternative. That’s in part because it can actually be accomplished; every programmatic ad platform provides some of the audience-building and measurement tools required for testing incremental ROI.

While optimizing media for incrementality has become a common objective, most marketers have stuck to running lift tests using a subset of their audience as the control group or testing on first-party audiences using CRM or CDP data. Geo-testing as a way to experiment for incrementality remains buried at the back of the toolshed.

There’s a strong case for dusting it off.

Geo-testing follows the scientific principles of controlled experimentation, but its test and control groups are defined by geographic regions, or geos, selected to have similar demographics (also known as matched-market testing). Anchored on source-of-truth transaction data from the business, geo experiments are cohort-based and don’t require user-level data to measure media’s incremental contribution to any metric that can be collected at the geo level.

Why the hesitation from advertisers? Geo-testing carries a reputation as overly complex, expensive and broad – compared to the cheap, easy scale of the web. It is true that geo-experimentation is deeply rooted in data science and was historically a manual, high-touch process. Identifying unbiased matched markets for geo tests requires a high level of detail. As the tests get more granular, data loss and noise increase and more matches are required to substantiate results. In the past, these costly experiments were rarely revisited for relevancy, and stale reports might wind up informing decisions for years.

But geo-testing has come a long way. While marketers were distracted by the potential of user-level tracking on the web, forcing MTA to accomplish something it never would, data scientists and academics around the world improved geo-testing methodologies to be more automated and efficient.

In recent years, independent reports from The University of Texas and The Journal of Economic Literature have advanced the applications of geo-testing. And platforms – namely, Google and Facebook – created open-source libraries dedicated to the practice. Advancements in the science have resulted in successful deployments of geo-testing at the DMA and even ZIP code levels.

Geo-testing is now more accessible, and the costs are more palatable, to the point where it can be a mainstream marketing strategy once again. While geo-testing will never be the most surgical measurement option, for a tactic like prospecting – which has increased in cost, especially with major walled gardens – it can be the best option available.

The ongoing stream of data privacy policy updates threaten even some first-party data collection. Many fingers are crossed that one of the 80 or more organizations working on a solution to the identity crisis will create a workable standard – but waiting for that to happen is a bad idea. Marketers have only just begun to see the fallout from Apple’s AppTrackingTransparency framework and, even with Google Chrome’s delay of third-party cookie deprecation, media mix blind spots are growing at a rate that most brands can’t afford to ignore.

In anticipation of more tracking restrictions and the eventual 2023 expiration of cookies, we expect marketers and platforms will continue to embrace experimentation as the way forward. Now is time to make geo-testing a part of those initiatives – to claw back some clarity and make media investment decisions based on reliable insight. I’ve even heard from some brands that several platforms, including Google and Facebook, are now developing and recommending geo-testing tools for advertisers.

Modern marketers who dismiss geo-testing as an outdated tool for brands that spend heavily on TV or radio will lose out on significant growth potential. Geo-testing is an important piece in the complete testing tool set because trusty, reliable geo will continue delivering valuable insights regardless of what the future holds for identity resolution, user tracking and data access.