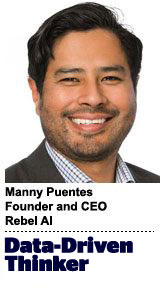 Today's column is written by Manny Puentes, founder and CEO at Rebel AI.

Few technologies are riding as high on the hype curve right now as blockchain. With its distributed nature, smart contract functionality and security features, it’s been heralded as the latest savior to ad tech’s admitted transparency problems.

Though the underlying technology is complex, blockchain is straightforward in concept.

It’s a specialized, distributed database that contains an ever-growing list of information called “blocks.” These blocks are continuously time-stamped and verified by a peer-to-peer network. Once added to the chain of transactions, blocks cannot be altered, making it a single, immutable source of truth. The implementation is best known through Bitcoin, the cryptocurrency that uses blockchain as the underlying public ledger of transactions.

Beyond Bitcoin, blockchain has lately been applied to a variety of applications in health care, finance and now advertising, with the launch of the first blockchain-based startups.

Blockchain has plenty of features that make it intuitively applicable and appealing to advertising like smart contracts and transparent records, but it has limitations as well. Not only is the technology still in its early days, but the scale and speed that programmatic advertising requires means that blockchain-based platforms are still years away, if they arrive at all.

That doesn’t mean the industry should shy away from innovating and experimenting with blockchain, but understanding its limitations will help us build advertising technology that is sustainable now and for the long term.

Blockchain’s biggest asset – decentralization – is also its biggest weakness in the digital advertising space. Due to its distributed nature, where transactions are verified by “miners” around the world, blockchain technology simply can’t analyze or process real-time advertising transactions fast enough. Current confirmation times for a transaction to be validated and added to the public ledger range between 10 and 30 seconds.

Compared to the millisecond response times required to return an ad, the blockchain is just too slow to be a tool for real-time fraud prevention and validation. Instead, companies are using it as a “post-campaign” layer to validate and authenticate transactions (relatively) long after the fact. While the eventual reconciliation can prevent money from getting into the wrong hands, the lack of real-time verification still puts a financial burden on publishers, which stand to lose the most from the inevitable clawbacks that will emerge after validation.

Blockchain also faces the hurdle of adoption and scale. By design, the technology needs to reach a critical mass of users before it works as intended, with all parties accounted for in the same blockchain ecosystem.

For instance, the success of the recently launched Basic Attention Token, a blockchain currency spearheaded by the ad-blocking browser Brave, depends largely on the wide-scale adoption of a particular browser and publishers agreeing to relinquish direct control over their revenue sources. Considering publishers have already made legal threats against the browser’s behavior, full cooperation seems unlikely to happen without concerted industry effort.

While adoption and scale is a solvable problem, it is still years away before every player in the landscape invests the time and resources necessary to commit to a brand-new technology as a transactional layer.

Rather than a standalone application built to solve all of advertising’s problems, blockchain should be considered a feature of a larger advertising technology stack. By starting with smaller, smarter applications, we can integrate blockchain into the ecosystem slowly and systematically so it can grow into a larger layer as the technology matures.

Companies can begin to build on blockchain through contract execution. Programmatic has always promised to eliminate the heavy lifting of RFPs and paper contracts, but it has been messy in practice with so many intermediaries between publisher and advertiser, which have siphoned a lot of value between what the publisher is willing to accept and what an advertiser is willing to pay.

Blockchain platforms, particularly Ethereum, have smart contract functionality natively built in, and rules can be put in place that only execute the contract in cases where the buyer’s price matches the seller’s price.

But discrepancies have been inevitable as these deals pass through supply-side platforms, demand-side platforms and verification partners. Private marketplaces have also been surprisingly susceptible to misrepresentation and fraud, as a recent report by RocketFuel and IAS revealed. The report found that PMPs had a higher likelihood of video placement misrepresentation and, similarly, the Methbot report uncovered the high occurrence of spoofed domains.

By providing a single, public source of truth, the blockchain can streamline and simplify the execution and verification of these private deals.

Finally, because blockchain is a publicly available database, all parties would have a single source of record to ensure a transaction did indeed make it from point A to point B. While not a solution for real-time transactions, the blockchain can be used as a post-campaign reconciliation tool, which could be used to prevent fraudulent actors from being paid. The Trustworthy Accountability Group is implementing a workflow version of this with its Payment ID concept, which would be even more secure and transparent if replicated in the blockchain ecosystem.

As a whole, blockchain technology is still in its infancy, and it has bugs and hackers of its own that need to be addressed and secured before widespread adoption will occur. Still, there’s no doubt blockchain will change the way many industries transact. Digital advertising is no exception.

The most effective approaches to integrate this technology will consider both its potential and its limitations to produce real and sustainable innovation.