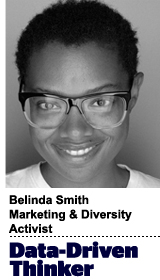 My personal experience with LinkedIn changed overnight on May 26. The murder of George Floyd was the first time I remember seeing a flood of Black Lives Matter content in my feed. People finally stopped posting about their work-from-home outfits, new standing desks and banana bread, and they were using their platforms on LinkedIn to decry anti-Black racism.

For a while this content was all I saw. First, second, third connections posting protest photos, videos of their own experiences with racism, charities and bail funds, and on and on. As a Black woman who has been in advertising her entire career I was so happy to see people finally speaking up and to be able to read the things that we previously only talked about when we got together for dinner, or went to that Black networking event or called each other in tears to talk about what was going on at the office.

Seeing these stories front and center was amazing. I felt validated that so many people shared my experiences. We were finally acknowledging that racism is, in fact, a professional concern and we were normalizing conversations about creating anti-racist work cultures and policies. I started writing again, posting my content on LinkedIn along with all my interviews, articles and essays.

And people who never engaged with me before took time to like, share, comment and personally thank me for my voice. It started to feel like a turning point, and I was proud of the new voices and hopeful to see companies committing to action, because they could then be held publicly accountable.

But a few weeks ago, one of the many people I follow who posts regularly on issues of diversity, inclusion and systemic racism wrote a detailed article about how, over the past few months since George Floyd’s death, this person observed stifled reach, and thus engagement, for Black professionals who post frequently about these topics.

The author – who I won’t name here – also gave a few examples of people having their accounts banned for sharing “objectionable” content about police violence in the United States. The post then showed disturbing screenshots of threats of death, rape, doxing and racial and sexist slurs displayed publicly as comments to anti-racism content. At the time the article was posted, those profiles were still active.

Seeing this article offered more context to my own recent LinkedIn experiences. Just like anti-Black racism in the office, I didn’t realize how widespread the issue was until I read other accounts.

I had experienced my “views of your post in the feed” numbers continue to dwindle, even as my likes, comments and shares increased. In some cases, I reached out to friends who said they had not seen content from me and sent me screenshots showing my recent activity, which did not include recent posts. I also saw a drastic drop of content in my feed about Black Lives Matter, diversity, equity and inclusion (DEI), and anti-racism in general. When I navigate to my first connections I can see their numerous posts from their profiles, but for some reason they’re no longer in my feed. Of course, all of these things together made me uncomfortably suspicious.

I recently did a fun test. I searched for “Black Lives Matter” on LinkedIn’s homepage and then clicked “content.” The first post led with “Black lives do not matter to Black Lives Matter and ANTIFA.” The next was from “The Nashville Tea Party” about gun violence in Chicago, with the post starting off with, “Where are all the ‘leaders’ and athletes and celebrities???”

Four out of the top 10 posts were from someone whose profile headline reads #AllLivesMatter, and I had to get all the way down to the eighth post for content from anyone I’m connected to. While all of this is personally unsettling to me, the larger question is this: What does it mean when an important conversation crashes into a black-box business model?

You don’t have to agree with my views or my preference for content to wonder how LinkedIn actually works. Has my reach, and the reach of others, been manipulated? Are we being throttled? Why are the accounts of those who have publicly posted death threats still active? What violations did the accounts of Black DEI professionals who were banned commit? How does the search recommendation engine work? Why am I not seeing my first connections’ posts in my feed anymore?

It seems a bit strange that we’ve been asking these questions and demanding answers from every social platform except LinkedIn. Brands and companies recruiting and advertising on LinkedIn account for more than $4 billion in revenue. Shouldn’t we hold it accountable like everyone else? Aren’t we owed some transparency?

LinkedIn has publicly stated it is “committed to building a safe, trusted and professional environment” and it “continually work[s] to improve the safety and security of your experience on our platform.” LinkedIn’s CEO, Ryan Roslansky, has stated that he is “committed to building LinkedIn as an anti-racist platform.” If all of that is true, I definitely have some questions for him.

Please step into the social media truth and accountability ring, LinkedIn. It’s time we heard from you.