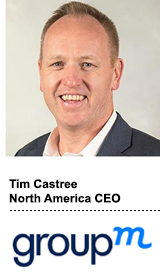 GroupM said Wednesday that Wavemaker global CEO Tim Castree has been named CEO of GroupM North America. Castree does not yet have a successor and will stay on in an advisory role at Wavemaker until a replacement is named.

Castree’s big task will be to get GroupM back to growth in North America, its slowest growing market but the world’s largest advertising market. The media group suffered a number of account losses this year in North America including Ford and American Express.

“GroupM is not growing as fast as it wants and needs to in this part of the world,” Castree told AdExchanger.

Castree hopes to make the media buying unit easier for clients, staff and partners to navigate.

“We have far too many operational silos,” he said. “While in many cases we simplify around clients, it’s not always the case. And even when we do, we don’t simplify for our people.”

While details of simplification are still in the works, Castree confirmed GroupM won’t be merging any more of its media agencies, like it did last year with MEC and Maxus to create Wavemaker.

“You never say never, but I’m fairly confident there’s absolutely no plans for further consolidation,” he said. “We’ve made the calculation we’ll get better and faster growth with the four operating companies we have today.”

Castree also wants to scale GroupM’s technology platforms and expertise across WPP. The media buying division will play a major role in fulfilling CEO Mark Read’s vision on technology, laid out Tuesday, which involves building and scaling a tech and data stack across WPP and operating more seamlessly with software providers like Adobe, Google and Salesforce.

To pull it off, GroupM will have to better organize and integrate the technologies within its own network as well as with clients’ and partners’ systems.

“We have amazing infrastructure, but it’s not joined up seamlessly enough and it’s not organized well enough to support our clients,” Castree said.

The news of Castree’s hire comes during a busy week for parent company WPP, which on Tuesday announced a major restructure and plans to lay off 2.5% of its staff. Since September, WPP has made two major cross-discipline mergers, between VML and Y&R and J. Walter Thompson and Wunderman, respectively, to better join up its offer for clients.

The changes come at the end of a rough year for WPP, which in April lost its longtime founder and CEO, Martin Sorrell, over allegations of improper use of funds. And after a year of slow growth, WPP’s market cap is down by roughly $10 billion since last year.