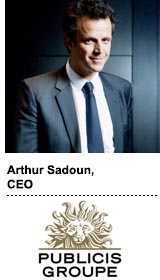 It was the same old story at Publicis Group in 2019: lagging organic growth as it tried to overcome a struggling creative business and assemble the pieces from a long transformation.

“Our organic growth was severely impacted by our traditional business and our transformation,” said CEO Arthur Sadoun on the earnings call Thursday.

In North America, which represents more than half of its business, 2019 organic growth decreased 3.5% to $6 billion. Growth was also negative in Europe and Latin America for the year.

Publicis is still struggling to turn around its creative business, which dragged down US business by 200 basis points due to client attrition. And its Publicis Sapient division is incurring significant costs as it repositions in the United States away from longtail projects and toward ongoing business transformation work.

Even picking up new clients such as Disney and Novartis last year didn’t mitigate these headwinds, nor did its single country P&L model, which enables it to cross-sell to existing clients more easily, Sadoun said.

Now that Publicis has all of the assets it needs, it will focus fully on execution and growth. The company projects -2% to 1% growth for 2020, with the first half remaining negative.

“We have to be realistic,” Sadoun said. “This recovery won’t happen overnight.”

Publicis sees attrition in its creative business slowing as it puts Epsilon at the center of pitches. And it will model Publicis Sapient in the United States after Europe, where it has success going to market with vertical-specific practices that focus on long-term business transformation.

“We’re shifting from project work to multiyear project assignments,” Sadoun said. “It will take time to fully materialize in our numbers.”

Publicis will also continue investing heavily in its workforce. The company spent $110 million on new talent and revamping its leadership structure last year, and it will spend roughly $55 million more in 2020. Restructuring costs in 2020 were about $175 million.

Investors, who’ve repeatedly heard this story from Publicis, pressed Sadoun for hard numbers around an attrition slowdown and Sapient headwinds in the United States.

“Hopefully what you will see here is we decided in 2019 to do the hard work,” Sadoun said. “If we want to have a good second half of the year, attrition has to go down, we have to win new business, and Sapient has to turn around in the US.”

Investors were curious about how Google’s removal of third-party cookies from Chrome in the next two years would impact Publicis, and especially its $4.4 billion Epsilon acquisition.

While Sadoun acknowledged the change will have “a significant impact on the entire marketing ecosystem,” he also argued it’s a “far bigger opportunity” than risk for Publicis, thanks to Epsilon, which he said is not heavily reliant on third-party cookies.

But parts of Epsilon’s stack, such as Conversant, match Epsilon-based IDs to third-party cookies to enrich client data sets and activate in paid media.

“Enriching [clients’] own data is going to become more difficult,” said Steve King, chief operating officer at Publicis Groupe. “But with Epsilon we can find alternative ways of reaching consumers … and help them build their own first-party data solutions.”

One such tool is Epsilon People Cloud, which Publicis will roll out in Europe this year to help clients onboard, enrich and activate their first-party data. Publicis will also grow Epsilon’s presence in new markets, which will likely require significant investments in acquiring local data sets.

Epsilon was instrumental in new business wins this year, and data and technology now make up 30% of Publicis’ revenue. But organic growth at Epsilon declined 2%, dragged by the creative agency business, which has been folded into Leo Burnett, and CJ Affiliate, which Publicis has put under strategic review.

“Epsilon was a core, fundamental component of those wins,” King said. “I suspect without Epsilon, I don’t think we’d have the same differentiated offer for clients.”