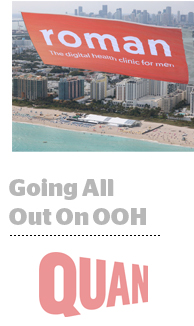 Direct-to-consumer brands in need of scale are increasingly turning to out-of-home – the only traditional media that’s showing growth.

But the OOH media market is a fragmented place for brands that first cut their teeth in digital.

“A lot of these brands don’t have an education about the space,” said Brian Rappaport, an IPG and Publicis vet and CEO and founder of Quan Media Group, an OOH-focused agency that launched Wednesday to take advantage of the growing OOH opportunity.

“Out-of-home is about so much more than billboards and subways,” Rappaport said.

“They’re looking for a personalized way to plan and buy out-of-home with an audience-first approach,” Rappaport said.

Quan steers clients away from the classic DTC playbook, where brands graduate from Instagram to super-expensive subway ads without thinking about whether it’s the most efficient way to reach their specific target audience.

“There are ways to explore out-of-home without spending $400,000 and wasting impressions,” Rappaport said. “You don’t need to be on the biggest wall outside of Penn Station just because it looks cool.”

Many emerging brands are based in New York City or other large cities and find it difficult to replicate successful campaigns in unfamiliar regions, said Rappaport, who is capitalizing on his knowledge of the North America OOH market and a Rolodex of connections based on his past agency experience.

“Sometimes it’s just about knowing who to call,” Rappaport said. “How do you get in touch with the guy who controls the screens all around the Staples Center? What about the screens outside the new Rams stadium [in LA] – those aren’t Clear Channel or Lamar units.”

Quan’s services range from strategy, planning and price negotiation to buying, measurement and attribution, which it provides with help from technology partners.

It works with Neustar, for example, which uses the psychographic traits of a brand’s audience to suggest where they should place their OOH media during the planning phase.

If a brand wants to reach a male customer under the age of 30 who makes a certain salary and likes going to the gym, for instance, it makes more sense to focus on Union Square rather than NoHo.

Measurement and attribution are key, but DTC brands also prize out-of-home as a creative canvas for storytelling, which “goes beyond what you can achieve with a Facebook ad or Google search ad,” said Will Flaherty, VP of growth at telehealth startup Ro, a subsidiary of men’s health company Roman.

During the Super Bowl, Roman flew an aerial banner in Miami. As part of another recent execution, Ro strung together dozens of large-format placements featuring customer testimonials in Boston’s South Station.

“We value the unique aspect of OOH to tell such stories in a high impact way, and we seek out placements that will impart an unmistakable impact,” Flaherty said.

Quan has its headquarters in New York City, with plans to open a Los Angeles office later this year. The company, which is looking to double headcount to 4 in the short term, is on target to bring in $20 million in billings in 2020.