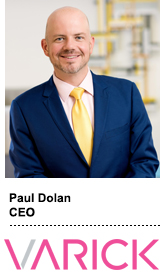 Varick, launched in 2008 as one of the first agency trading desks, has always had a president reporting into to senior leadership at parent company MDC Partners. Now with its first CEO, Varick is establishing a bit more independence from the group.

Unlike other agency trading desks, which have repositioned as programmatic centers of excellence for holding companies and embedded their talent at network agencies, Varick’s work isn’t predominately with other MDC-owned agencies. More than 80% of its clients are small- and mid-market agencies and direct-to-consumer digital brands outside of MDC’s network, Dolan said.

“When Varick started, its charter was to provide programmatic services for the MDC family,” Dolan said. “There’s been less of a need for that because they’ve organically grown those businesses.”

As CEO, Dolan will continue focusing on helping agencies and brands understand and unlock value from programmatic, whether that’s by doing the execution itself or by helping clients do it in-house. In addition to its meta-DSP, Alveo, Varick offers training, insights, analytics and expertise for clients who want to get more involved in programmatic.

“Programmatic businesses continue to evolve from nondisclosed mark-ups and margins to services divisions bringing expertise,” Dolan said. “The conversation becomes more transparent and bespoke, and therefore gets away from the early nontransparent, pre-packaged products.”

Varick has had an easier transition than its trading desk peers in becoming more consultative, Dolan said, because its client set is “more modern in their thinking and not tied to the legacy world of programmatic.”

But many agency trading desks are still trying to reestablish trust, he added.

“It’s a more difficult conversation [for them] because of the nature of the clients, how big they are and how deep the relationships go beyond programmatic media,” he said.

As for most trading desks, the shift in Varick’s business model, brought on by the ANA’s investigation into nontransparency, has had an effect on margins.

Varick is still growing – Q4 was the largest quarter in the company’s ten-year history, Dolan said, although he declined to break out details. But doubling down on programmatic services, consulting and in-housing relationships will position the company for a future where clients want more control over programmatic.

“The future programmatic company doesn’t get funneled media clients from partner agencies,” he said. “It’s got to be high-value consultancy services that make an impact on business outcomes. That’s how we’re going to maintain or grow margins.”

To highlight this shift toward transparency, Varick operates on flexible pricing models. Clients can choose to buy media on a performance outcome basis, like cost-per-install or cost-per engagement, or buy into an FTE model that packages services, insights and analytics. They can also engage Varick to help them bring programmatic expertise in-house.

“Some want us to fit more into a media supplier-type relationship. Others want us to be a technology services partner,” Dolan said. “We’re equally able to accommodate.”

Dolan, who worked at Xaxis for 17 years and launched its performance unit, Light Reaction, has a big task ahead of him to grow the business in four areas: people, technology, revenue and clients. MDC is doubling down on Varick as a growth engine, he said.

“We plan to have an outsized impact on growth for MDC,” Dolan said. “Hopefully we can create a commercial partnership where we get compensated for the value we provide in pushing the business forward.”