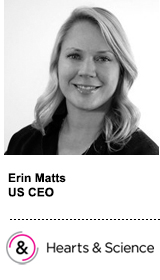 It’s harder for media agencies to have the buying clout in the digital world that they have in traditional channels.

Hearts & Science is building that influence through thousands of private marketplace deals set up directly with premium publishers, which lets the agency access their highest quality inventory outside of the open exchange. Because the agency spends heavily across publishers, it can leverage that spending power when setting up PMPs on favorable terms for clients, said Erin Matts, CEO of Hearts & Science.

“[There’s] this idea that there is no such thing as digital clout,” said Matts. “Actually, there is. We want to press the gas pedal on taking advantage of that.”

Hearts & Science is also pushing hard on the agency trend du jour of bringing media and creative closer together to deliver more integrated work for clients.

But when creating client-centric teams across agencies, it’s important talent has a direct connection back to their agency identity.

“Having lived through lots of those integrations, those cultures are still so important,” Matts said. “They matter to clients, too.”

AdExchanger: Is Hearts & Science moving away from buying on the open exchange?

ERIN MATTS: Most of our clients are asking for PMPs. There’s a feeling of security associated with that. It’s not that we’re saying “PMPs or bust,” but we’re proud of the PMPs we have and the time and investment we’ve made to create those deals.

We have the ability to do that because we’re a large holding company and we spend aggressively with all the partners. That makes PMPs valuable. Especially with the walled gardens, that type of relationship is paramount.

I certainly don't think open exchanges are going away. Any publisher may package their premium inventory in a PMP, but there are always clients who want that reach buy and are comfortable with a mix of premium and less premium.

Agencies always talk about bringing together creative and media talent. How does that manifest at Hearts & Science?

There’s no one right way to do this. The AT&T and BBDO integration is co-located, because of the blistering pace the business runs at. [Auto] does integration in a different way. It takes nine months for someone to decide if they want to buy a car, so auto has a bit more luxury in thinking about how they integrate.

[For] AT&T, there’s an integrated brief. The data and analytics team looks at big business questions, does audience segmentation and produces insights. Those are shared with the strategic planners at BBDO and Hearts. We’ve seen success thinking about audiences absent of a particular creative brief. There’s ongoing work that allows us to quickly pivot based on sales numbers.

How’s the technology set for delivering on data-driven creative?

Some technologies better understand creative needs than others. Media teams are usually more technically proficient about how it works. That’s been an interesting way to unite people and find common knowledge about the advantages of certain technologies.

Many clients own those contracts. Clients want to connect this to their back-end systems and owned technologies, whether it’s point of sale or CRM. Some have their own ad tech. Some have been in-housing. There’s a desire to own those contracts so they’re sure, clear and confident, and we welcome that.

How is in-housing affecting Hearts & Science?

A number of our clients have brought aspects of their business in house, whether that’s programmatic or social. We work in a consultative manner with The New York Times. They’re producing their own content. There are aspects of that business that almost require them to take this in house.

On a number of clients, we’ve implemented a fit and flex model. We’re thinking about a bank of hours where we’re able to pull different consultants, like someone who is an expert in Adobe, someone who knows everything about the Google stack, or someone who is really interested in brand safety and knows those partners.

Consulting tends to be project-based. That makes it difficult to reconcile hours when you’re on an FTE. A client may need a SWAT team to run an RFP for an ad server or DCO partner. That’s a five- to six-month process. It’s another way we can serve a client holistically.

How are you training your buyers to purchase advanced TV inventory as it becomes more available in the marketplace?

There are some limitations with the footprint of addressable TV. [Through] Omni, we’re able to overlay behavioral and identity data onto linear television to optimize the buy. That’s a stepping stone to full addressability.

A big TV advertiser is going to always be a little apprehensive about the footprint of addressable TV inventory. But there’s definitely opportunity. The networks are figuring out the right way to adjust to a new reality. Everyone realizes that change is coming.

How does Hearts think about diversifying client spend when more digital dollars are ending up with Facebook and Google?

It’s challenging. Google’s reach goes well beyond their own inventory. That was one of the first asks I had when I came to Hearts: How are we spending by client, and do we need to step back and have conversations about that?

I’d venture to say many other agencies are looking at that right now before the upfront. I personally look at it every month. It’s a delicate balance. You want to maintain your position with any partner. But it’s something we take into strong consideration.