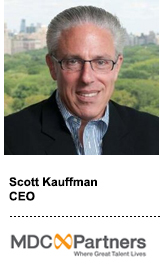 MDC CEO and Chairman Scott Kauffman will step down from the holding company.

Kauffman will remain CEO and retain his board seat until the company finds a replacement, according to The Wall Street Journal, which first reported the news Wednesday.

But MDC has been in decline for a while. It lost half its stock value in the past year and, since 2015, its market cap has dropped from $1.5 billion to $250 million.

MDC’s challenges date back to 2015, when CEO Miles Nadal was ousted following an SEC investigation into his accounting practices and trading of company securities. Nadal reimbursed the company $10.5 million for medical, travel and other expenses improperly documented over six years.

But the damage was done. MDC’s stock tumbled 30% upon the news, starting a steady decline and increasing analyst skepticism about the future of the holding company.

Kauffman, a board member at the time, became CEO three months into the investigation, in July 2015 – a role that was never meant to be permanent.

Revenue grew slowly over the next three years, but by Q2 2018 it took a 2.8% tumble to $380 million and organic revenue declined 1.7%. In July, MDC laid off a handful of its corporate team.

Part of the problem is that under Nadal, MDC loaded up on debt. The company took on $300 million in debt financing in 2009 and an additional $775 million in 2013 to fund acquisitions.

MDC has been slow to pay off that debt, despite a $95 million investment from Goldman Sachs in early 2017 for that exact purpose. As a result, its stock has continued to suffer – and frustrate investors.

“I think the handwriting is on the wall that things were slower than you thought,” Leon Cooperman, chairman and CEO of Omega Advisors, said on MDC’s Q2 earnings call in August. He criticized MDC brass for taking so long to cut costs: “I mean, shouldn’t we have been reducing costs six months, nine months, 12 months ago rather than doing something now?”

While MDC has driven $7 million in cost savings on improvements in agency structures, $2 million in real estate costs and $40 million in annualized staff costs, it hasn’t been enough to please investors, with some asking whether MDC will explore asset sales.

“We’re looking at any and all steps necessary,” Kauffman said on the Q2 earnings call. “That includes an evaluation of the portfolio, continuing to invest behind our growth pillars, but also looking at the possibility of dispositions of assets that are not core or might be more valuable in someone else’s hands.”

Like its holding company peers, MDC is facing structural headwinds such as client cutbacks, especially in the CPG sector, and a delayed new business pipeline.

In programmatic, MDC seemingly is struggling to ink partnerships with big brands; in May, the group brought in Paul Dolan as the first-ever CEO for its trading desk, Varick Media Management, to lead a pivot in the group’s business model toward servicing small and mid-size agencies.

Because of these issues, MDC will not focus on acquisition activity but rather “delivering second-half performance,” said David Doff, chief financial officer at MDC, on the Q2 earnings call.

“We’re focused on our review of our existing portfolio and that’s where we’re spending our time,” he said.

Despite MDC’s troubles, Kauffman had several successes during his tenure as CEO. MDC’s agencies, including Anomaly, Crispin Porter + Bogusky and The Media Kitchen, are all performing well. The group brought in $17 million in new business wins in Q2 2018.

Kauffman was also successful in bringing Alex Bogusky, who had retired from the advertising industry in 2010, back to CP+B.

And as the group continued to centralize its data, tech and analytics capabilities, that segment grew more than 20% year over year in Q2.

While a breakup of the company could be a solution to its financial problems, more collaboration might be the key to success at MDC, Forrester analyst Jay Pattisall told AdExchanger. Unlike its competitors, MDC has doubled down on its agency brands rather than further integrating teams across its network.

“MDC needs to move beyond its organic approach of like-minded agency entrepreneurs banding together and create teams of complementary capabilities,” he said. “MDC Partners’ incoming CEO should prioritize a more structured – if not branded – way for its agency partners to work together and strengthen one another.”