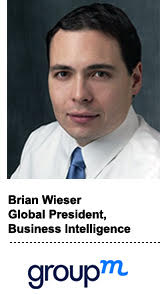 Brian Wieser is heading back to the agency world, joining WPP’s media buying unit GroupM as global president of business intelligence, the company said Wednesday. He will report to GroupM CEO Kelly Clark.

It might seem like an odd time to jump to an agency, given the volatility of the industry and the epic amount of consolidation happening across the holding companies. But Wieser said that, independent of those challenges, agencies are among the most durable parts of the business.

Wieser joins after a seven-year stint as an analyst at Pivotal Research, where he carved out a niche focusing on the convergence of agencies, big marketing tech companies and media platforms.

His mandate at WPP will also follow those lines, though his specific duties haven’t been etched out yet: “I’m having a conversation about that this morning,” he told AdExchanger.

Both are still involved with WPP, and Wieser will collaborate with them.


“The Amazon–Whole Foods thing was an Aha! moment for many of the world’s largest marketers,” Wieser said. While the concept of having a direct line to consumers wasn’t new at the time, the magnitude of the Whole Foods acquisition forced business leaders to realize that DTC concepts would upend the way large companies do business.

“I started to think about how large manufacturers are evolving their businesses, and if they’re not, how they need to,” Wieser said. “They’re not in the business of just keeping media owners in business. It’s a way to satisfy a goal.”

In some ways, Wieser’s role at GroupM is similar to what he did at IPG’s Magna for seven years, before his term at Pivotal.

But it will also be very different.

At GroupM, Wieser’s job will be more global, whereas at Magna, he had more US level responsibilities around “upfront dynamics” like marketplace forecasting for pricing. He won’t be doing that at GroupM.

As an analyst, Wieser was known as a free thinker with a view across the ad industry. But he’s not worried his association with WPP will cut off his insight into the goings-on of other companies.

“I wasn’t the analyst known for CEO access,” he said. “The work I did was based on studying the industry, using publicly available information.”