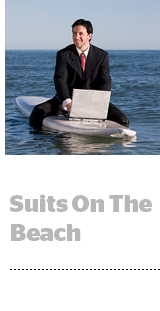 After steadily acquiring small digital and design agencies for the past decade, the agency divisions of major consulting firms, such as Accenture, PwC and Deloitte, are making their presence known on the Croisette this year.

Deloitte Digital had a far lighter touch at Cannes last year, with a cabana and a few sponsorships related to the Young Lions program, said managing director Todd Paris.

This year, at its plush suite at the Majestic, the group held more events with media partners such as DoubleClick, which Deloitte Digital works with to help clients bring media in-house. It’s also hosting a happy hour with the Association of National Advertisers.

“We go [to Cannes] to talk to brands and talk about advertising and the use of big data plus creativity,” Paris said.

IBM also has a cabana along the Croisette by the Palais, where senior executives from its consulting arm, ​IBM iX, are holding meetings with clients and partners in air-conditioned conference rooms overlooking the Mediterranean.

But consulting is where it ends, said Robert Schwartz, IBM iX’s global leader of agency services. IBM iX will continue to advise CMOs on their media strategy but will never acquire traditional planning and buying agencies, he said.

“Credit to the folks that built that business, but it’s fundamentally built on one principle, which is scale,” he jibed. “In a programmatic world, scale doesn’t matter. The holding companies have built castles in the sky around that principle, and I’m not sure how they shift from that.”

Meanwhile Accenture, which made the biggest splash in the media world recently with the launch of a programmatic buying unit, sponsored its usual yacht on the Cannes harbor and hosted panels, events and meetings all week.

And throw a stone or your wine glass overboard and you’ll hit PwC’s yacht, which is docked right alongside Accenture’s.

While agencies admit they notice the consulting firms throwing their weight around the festival this year, they claim they’re not too concerned about the competition – especially on the creative side.

“What agencies still do well is having creativity and talent at the heart of their business, a broader view of not only of creative, but of data, the media marketplace and [everything] consumers are experiencing,” she said. “At the end of the day, we welcome competition.”

And just being at Cannes doesn’t change the fact that on the media side, consulting firms are tardy to the party, said Hearts & Science CEO Scott Hagedorn.

“Accenture is really late to the programmatic game,” he said. “[And] if they’re going to be about bringing things in-house, Adobe has been trying to get clients to do that for years.”

The sentiment is a bit different among CRM agencies, which compete more directly with consultancies on the data and systems integration side. MRM McCann President Kate MacNevin said consulting firms aren’t just becoming more visible on the Croisette but are showing up in more pitches as well.

“It’s definitely more consistent,” she said. “They’re a reality for our clients.”

And again, a flashier show at Cannes doesn’t mean that clients are suddenly jumping ship to consulting firms, MacNevin added.

“When they’re looking for a fully integrated marketing partner, they’re still ultimately coming back to the agencies,” she said.

For Merkle CEO David Williams, however, dismissing the reality that consultants are legitimate competition is short-sighted.

“They’re a real threat,” he said. “They have stronger transformation capabilities than the agency world. If this world is becoming about tech at the heart of everything and transforming a digital economy, clients are going to go to partners that can help them on that journey.”

Unlike the consulting firms, agencies have scaled back their presence in Cannes this year, as many anticipated. Not all have tightened the purse strings quite as extensively as Publicis Groupe, but most sent smaller teams and notably toned down their parties, events and lavish spaces along the Croisette to focus on meetings with clients.

“It does feel dialed down to me this year overall,” MacNevin said.

That more muted presence extends to the marketers, Richman said, which are also sending leaner teams as they cut their budgets in a low-growth market.

“Marketers, understanding the cost value, have all scaled back a bit on their attendance,” she said, noting that ad tech companies were also less splashy this year.