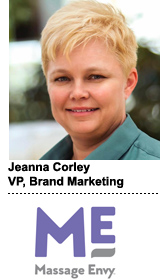 When Jeanna Corley started working in Radio Shack’s marketing operations in 2014, she knew it would be a short-term gig.

But the CEO at the time, Joseph Magnacca, coached her into the role, promising there’d be no red tape and, as a marketer, she’d be able to do whatever she wanted.

“So, take a risk, and let’s go out and explore what technology is out there, what we can benefit from and do things out of the box,” Corley recalled. “I got a crash course on big implementations.”

When Magnacca moved on to become CEO of Massage Envy, Corley followed as his VP of consumer brand marketing. When she arrived in 2016, the company – which had once been regional but quickly developed franchises across the United States – had literally nothing in its marketing stack.

“We had Google Analytics for the website and we could pull reports. That was all marketing had,” Corley said. “They didn’t even get normal reports from the agency in terms of what was working. You had to ask for it, it was a custom request, and we paid by their time to pull the report.”

For the past three years, Corley has helped assemble the core pieces of Massage Envy’s marketing technologies and partnerships. Six months ago, she started working with the company’s newly-appointed CMO Kathy Collins, who’d spent the previous 12 years at H&R Block.

AdExchanger: Where do you start when you begin with nothing?

JEANNA CORLEY: The first thing we stood up was a CRM system. We wanted Salesforce’s ExactTarget product. I’d worked with them before they were acquired.

That was our most pressing deadline, because we were pulling the plug on the group that had been handling that. So we stood that up in 90 days, which is really rapid for that system.

We were really beginning on the insights. We weren’t able to grow the team and hire the right analytics people, but I’d engaged in the past with an analytics vendor.

We gave them four years of customer transactions so they could harness the insights. They started to define behavioral profiles, our most loyal members, our high value, low value, mid value segments.

And then we layered third-party information to define the demographics.

Then we could start to see the picture of our most loyal customers, their behaviors, flags indicating people not retaining the brand, flags that show a guest is more or less likely to convert if they don’t on their first visit.

Then we started developing strategies around that.

As we’re tagging this information, we could then stand up a DMP with our media agency so we could flow all of our insights into this platform and build up audiences.

How did you get the franchisees involved?

We needed to help [the franchisees] understand that some things were right to do when we were smaller and regional. But once we hit 49 states, we were past needing to pivot and needed to start having true strategies to do efficient buys.

There’s still a portion that’s kept local. If they want to do additional digital work or radio or out-of-home to layer on locally, they can do that. But we do national level media buys, and the CRM strategy is all on the national level.

Where’s the focus for your paid assets?

Search is our most effective, particularly in combination with television and radio. Beyond search, we’ve heavied up on digital video buys.

For display, we focus on retargeting and focus on an audience. We’ve had great results in Boston, where they did a geofenced mobile digital campaign that saw some good lift.

Is there a strategy that makes it very effective in certain circumstances?

We see it working best when it’s carefully planned as part of a larger strategy. When we do geotargeting, we’re doing it in conjunction with other elements. We put out-of-home in an area, then start targeting and re-targeting people in that area.

How about addressable TV?

We’ve looked at the area, but it’s the balancing act between the efficiency of the buy, knowing that when we go into addressable, we’ll be on the same shows. We do more targeting on our digital video than we do in true television.

If our television buy was larger, I’d start to gamble there more.

What are the next steps for you?

We’ve got the core pieces in place. How do we start to optimize this and leverage the insights in the right places? I’d like to lug some AI to our marketing data warehouse, so we can get into the store level and let them know who they’re speaking to.

How do you evaluate AI partners?

That is what I’m going through right now. I’m at the point where I know I need some things. My first question is an optimization question from the operational side. I’ve had conversations with people I respect in the industry.

Bottom line: We won’t plug in something off the shelf. Everyone’s looking for the right solution. But I have a feeling that it’s going to be everyone figuring out a custom solution. Machine learning is more or less a prediction engine that finds the best outcome. But nobody’s the same.

Interview has been edited and condensed