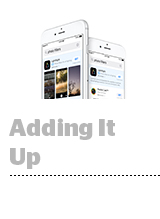 Apple has never really warmed to advertising, but its search ads business could clear $500 million this year and quadruple to $2 billion by 2020, according to Bernstein analyst Toni Sacconaghi. That growth could provide a boost for Apple in its goal to double services revenue to $49 billion by 2020. Apple is most likely to grow its search business by expanding into new markets – Apple App Store search ads aren’t available in China, for instance. It also offers one sponsored placement atop the first page of search results, while other app store operators such as Google and Amazon feature multiple promoted apps and include paid listings beyond the first page. Sacconaghi added that his estimates for Apple’s search business are “conservative.” CNBC has more.

Fraudsters with backgrounds in ad serving and SDKs made off with hundreds of millions of dollars exploiting a loophole in the Google Play Store by buying up lesser-known Android apps to use as fronts and testing grounds for mobile fraud, BuzzFeed reports. Fraud detection firm Pixalate first uncovered one aspect of the plot in June, and Google also published a blog post Thursday on its efforts to combat the scheme. “These bots are unique to this operation, mimicking real user behavior. The traffic is therefore a mix of real users inside a real app, and fake traffic,” said Asaf Greiner, CEO of Protected Media, a cybersecurity company that analyzed the app network at BuzzFeed’s request. The fraud scheme was orchestrated by people, real businesses and shell companies across Israel, Malta, Germany and Serbia, but there’s plenty of guilt closer to home. “It’s clear to us that the people orchestrating this scheme are both familiar with the ad tech industry and with the mainstream data science approach to detecting ad fraud,” Greiner said. More.

Chinese smartphone maker Vivo will partner with Taboola to deliver personalized news for its homescreen “swipe right” function. The deal aims to increase revenue for Vivo without overwhelming users with ads. For Taboola it’s a way into a major growth market that has proven difficult for some tech companies to reach. “We look forward to creating the next wave of personalization on smartphones in addition to powering quality journalism by driving new audiences directly to publishers’ sites as opposed to walled garden environments,” said Adam Singolda, Taboola’s founder and CEO, in a press release.