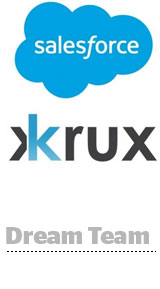 The acquisition of Krux appears to be paying off for enterprise cloud giant Salesforce. The company’s Marketing Cloud–now on a $1 billion run rate for 2017–turned in Q2 revenue of $317 million, a 36% increase over Q2 2016. The acquisitions of Krux and ecommerce enabler Demandware helped Salesforce “expand its total addressable market and [improve] growth,” especially into a B2C client base, COO Keith Block said during Salesforce’s earnings call. Results.

A new “duration-weighted metric” from the Media Rating Council measures viewable impressions based on how long an ad was viewed, Axios reports. More. Not all advertisers like the new metric because it doesn’t account for viewing discrepancies between long- and short-form videos, said MRC CEO George Ivie. But it’s a step toward finding a better way to measure digital ads. "Advertisers are more serious than I've ever seen them in pulling back dollars from those who won't be audited," Ivie said. "I've never seen advertisers more energized than right now about the quality of measurement."

Snap’s stock price has taken it on the chin since its IPO. And having having finally strung together a week of growth, some analysts call Snap’s recent gains a dead cat bounce (when investors step in to artificially bottom out a stock slide). But if Snapchat sticks to its guns, bullish investors could win big buying up deflated shares. New eMarketer estimates have Snapchat ahead of Facebook and Instagram (though not the two combined) among 12-17-year-olds and 18-24-year-olds in the US and UK. Snap’s growth won’t come from tens of millions of new users in Indonesia and India, but rather from quieter average revenue per user (ARPU) gains in the US and Europe.