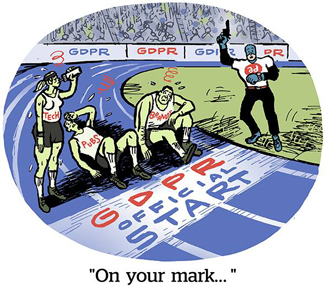 Out Of The Blocs

The DMA targets gatekeeper platforms (namely Google, Apple, Amazon, Microsoft and Meta), while the DSA broadly applies to digital businesses, social media and online marketplaces. For example, tech companies with recommendation services must disclose to users why certain content shows up in their feed and also crack open the black box on how their algorithms work.

The DMA applies to businesses with an annual turnover of 7.5 billion euros and/or that have a market cap of 75 billion euros – meaning pretty much every large platform you know. And the fines are a doozie. The DMA calls for a maximum fine of up to 10% of global platform revenue. GDPR raised eyebrows with a 4% cap.

Andreas Schwab, a European Parliament member from Germany and backer of the legislation, hinted to reporters that Google or Meta will likely be the DMA’s first targets, TechCrunch reports. “But the key question – or the more difficult question will be – what core platform service will they choose first from one of these companies?” Schwab says. “That’s, I think, a very open question.”

Drop Till You Shop

TikTok’s parent company ByteDance is a huge online shopping hub in China, where the app is called Douyin. It tried to bring a similar approach to the UK and Europe last year, with plans to expand stateside.

But the Financial Times (FT) reports that TikTok has abandoned its plan for TikTok Shop, the live-shopping experience where users sell items and collect a commission. The program petered out because creators dropped out. Low adoption is not a good look. “The market just isn’t there yet,” one TikTok employee tells FT. “General consumer awareness and adoption are still low and nascent.”

But maybe platforms should take this as a sign. It’s possible that social commerce may prove to be yet another fruitless online grail quest. Although social media platforms and programmatic vendors are banking on social media-based shopping, the question is: Do consumers care?

TikTok was supposed to exemplify the social commerce trend, and maybe it is … as in, it’s not gonna happen.

All That’s Googled Is Not Gold

In the coming weeks, Google will now also delete location data associated with visits to sensitive medical appointments, including abortion providers, “soon after” they happen.

“Some medical facilities people visit – like addiction treatment facilities and abortion clinics – can be particularly personal,” Jen Fitzpatrick, Google’s SVP of core systems and experiences, writes in a blog post.

Google’s commercial location tracking setting is already turned off by default, but the extra layer of protection will also apply to users who have opted into tracking. In other words, the new policy cannot be toggled off.

Location isn’t the only issue, though. Privacy advocates worry about the security or potential liability of data that may indicate, not prove, that someone is seeking out abortion-related services, such as period-tracking apps. This concern is likely behind the recent push by several Democratic lawmakers asking the FTC to regulate Apple and Google’s mobile data processing more closely, CNET reports.

While Google doesn’t acknowledge this move as a policy influence, it does emphasize its history of “pushing back” on law enforcement’s data collection demands.

Time to hire a chief media officer. Advertisers are insufficiently trained, according to ID Comms. [MediaPost]