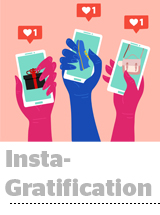 It was only a matter of time (and money). Instagram announced that it’s begun testing a checkout feature with brands like Adidas, H&M and Warby Parker that lets users purchase products without leaving the app. Read the blog post. Previously, Instagram had to send users to retailer and manufacturer websites to complete a purchase. This isn’t parent company Facebook’s first attempt to build an ecommerce business, but with more people using Instagram to follow brands and influencers for shopping inspiration, the photo-sharing app has a real shot at payments. And Facebook needs commerce now more than ever, with inventory on its core News Feed hitting a ceiling, Bloomberg reports. The move puts Instagram into competition with Shopify, the ecommerce platform that powers many direct-to-consumer brands that advertise heavily on Instagram. More.

Media consumption remained flat year-over-year at about 10.5 hours per day, but mobile phones and connected-TV devices are winning bigger slices of the pie, according to Nielsen’s Q3 2018 Total Audience Report released on Tuesday. There aren’t drastic shifts in overall market share – live and time-shifted TV (which is to say traditional cable and set-top box viewing) lost the most ground, with a 2% overall share drop, and smartphones were the big gainers, with mobile going from 21% to 24% of all US audiences. But there are much larger swings among younger audiences. For 18-34 year olds, live and time-shifted TV was surpassed by mobile in Q3 2017, and a year later that gap has widened by an additional 10% of all media consumption. More.

Snap is in the process of launching new shows under its Snap Originals video series. The new videos, both scripted and docu-series, are produced by big-name TV executives and aim to get younger generations to form a new habit around watching quality, short-form mobile video. Snap, which is aiming to be profitable in 2019 after a rough first year on the public market, is faced with competition from Instagram (per usual) and new startups like Jeffrey Katzenberg and Meg Whitman’s NewTV. But Snap’s “clear advantage is that it knows how to create content that actually works within the framework of its app better than anyone,” writes Axios’ Sara Fischer. More. Related: As Snap chases big TV budgets, it’s also starting to pay its influencers, who previously struggled to make money on the platform. AdAge has more.