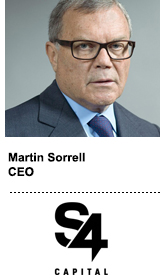 S4 Capital wants to acquire a company with access to unique first-party data.

The holding company, helmed by former WPP CEO Martin Sorrell, is in discussions with two companies – one in the retail space with access to 90 million customer records and another in transportation with data for 100 million customers.

“We would like to lay our hands on sources of first-party data,” Sorrell said Monday during S4’s first-ever earnings call. “It’s not easy. There are some, but valuations are high.”

With digital production company MediaMonks and programmatic agency MightyHive in its portfolio, S4 can sell a strong connection between digital content and media buying services. But access to unique first-party data would give clients added value at a time when more spend is directed to walled gardens.

Revenue at S4, which Sorrell launched in April, grew 58% in 2018 to $72.6 million. Billings reached $78.3 billion, with MediaMonks bringing on Avon and Mondelez as new clients and MightyHive scoring accounts from EA and Electrolux.

This year, Sorrell said he would like to see S4 win more “whoppers and whales” as it aims to double in size by 2021.

“We have a very good base of clients, but insufficient penetration,” he said. “Our biggest client last year was $10 million. We think we’ll have two $20 million clients this year.”

But S4 is also eyeing the small- to medium-sized business market, which have helped major ad platforms build their businesses.

“We’re very interested in the potential in the small- to medium-sized business market,” Sorrell said. “People forget Google and Facebook are built on the little boys and girls.”

S4 is seeing “strong traction” in cross-selling services between MightyHive and MediaMonks, Sorrell said. With roughly three-fourths of S4’s business originating at MediaMonks, the big opportunity lies in selling in MightyHive’s programmatic offer.

“What we’re doing is, in a way, going back to the 1990s and reuniting creative and media in the digital ecosystem,” he said.

S4 also sees an opportunity to consolidate accounts within its group as clients seek to slim down their agency rosters. Its flexible model, which embraces a hybrid of in-housing and outsourced services across content and programmatic, is attractive to clients seeking more control.

“It’s unrealistic today to say clients are not going to do more themselves than in the past,” Sorrell said.