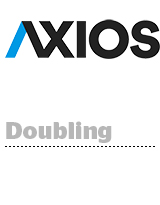 Axios is on track to rake in $20 million in revenue in 2018 – more than double last year. The news site, which launched in January 2017, even has “an outside shot at being profitable,” CEO Jim VandeHei tells Digiday. It also has “a very clear path” to doubling revenue again in 2019, which may be the year it rolls out one of its long-promised subscription products. For now, Axios is doing fine without charging for subs. (Be smart: Axios was founded by former Politico execs, so they know what they’re doing.) To keep increasing revenue rapidly, Axios must continue growing its ad business and audience, which grew 30% in September to 8.3 million. Axios is also dipping a toe into TV with a limited HBO docu-series, but for now, television is just a test. [More: Read AdExchanger’s interview with Axios president and co-founder Roy Schwartz.]

Adelphic, the DSP owned by Viant, is offering marketers a subscription that will allow them to buy unlimited impressions for $3,000 per month. The goal is to reduce the ad tech tax, as DSPs generally take a cut of media spend per ‘seat,’ or people logged into the platform. CEO Tim Vanderhook claims Viant has enough customers to make a profit off a fixed fee. For marketers, who have to commit to a 12-month trial for the subscription, a fixed-fee could make a DSP’s motivations a bit more transparent, said Olivia Bias, VP of marketing at Goodway Group. “When your DSP is being paid based on how much you spend, it puts motivation into question,” she told Ad Age. “Do they want me to spend more because they want more money or because spending more is the right thing for my business?” More.

Cambridge Analytica broke British law when it misused Facebook data to help Donald Trump, according to a report from the UK’s Information Commissioner’s Office. The company would face a steep fine, according to The New York Times, if it weren’t already in the throes of bankruptcy. The report also found that an insurance company owned by a major Brexit backer used its own customer data to aid in the breakaway effort. Eldon Insurance shared its customers’ email addresses with Leave.EU, which then sent campaign messages. More.

All In On Header

Rubicon Project continues to execute on its turnaround plan. The company’s Q3 earnings, released Wednesday, reported ad spend growth of 24% year over year to $242 million. Take rates increased slightly to 12.3%, up from 12.1% in Q2, and are expected to hit 13% in Q4 thanks to renegotiations with sellers. Rubicon’s big opportunity lies in helping publishers navigate header bidding. “We believe the combination of transparent, open-sourced wrappers, easy-to-use tools and managed services are the future of head bidding, and we’re offering those solutions to our largest sellers,” said CEO Michael Barrett. Rubicon now has more than 1,200 header connections, representing 80% of revenue. By next year, almost all of its business will come from header bidding. Overall, revenue was up 4% to $29.7 million. Read the release.