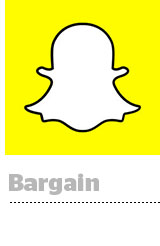 Instagram may have run away with Snap’s stories format, but – consolation prize! – Snap is benefiting from all the exposure. According to Digiday, Snap story ads are now seen as a great value, selling at CPMs of just $1.88 versus as much as $19 for Instagram story ads. Not only does Snap have lower CPMs and CPIs, but it’s providing solid ROI and conversion rates, buyers said. And as Snap improves its measurement capabilities with the Snap pixel and its self-serve buying options, advertisers are warming up to the platform. “Snap now has the more efficient pricing narrative,” said Jon Morgenstern, VP of paid media at VaynerMedia. More.

European regulators are after Facebook and Google. On Tuesday, Facebook was slapped with a $660,000 fine for allowing Cambridge Analytica to harvest user data from its platform without consent, The New York Times reports. It’s small peanuts for Facebook but the maximum fine allowable by the British Information Commissioner’s Office. Meanwhile, Google faces a multibillion-dollar fine from the EU commission in Brussels for abusing the dominance of Android on mobile phones by forcing manufacturers to pre-install Google apps on their phones. The case is aimed at Google’s monolithic ad business, which is growing faster on mobile than desktop, The Wall Street Journal reports. But Google’s problems don’t end in Europe: In the US, senators are questioning Google parent Alphabet about a potential breach of data privacy on Gmail. WSJ has more on that.

A frenzy of activity following AT&T’s $85 billion takeover of Time Warner shows how much value telcos put on top news and entertainment assets. Comcast is expected to up its bid for Sky, Variety reports, after Fox countered its $31 billion bid with an offer valuing the European satellite TV network at $32.5 billion. Elsewhere, Comcast is likely to lose out to Disney’s $71.3 billion counteroffer for the bulk of 21st Century Fox. Comcast had offered $65 billion and would probably continue upping the ante, but Fox’s board members think a Comcast acquisition is less likely to get DOJ approval. Comcast did succeed in increasing Disney’s price for 21st Century Fox by a cool $19 billion. More.