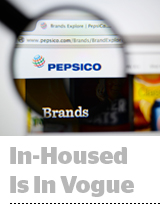 WarnerMedia had its first upfront under the new AT&T brand. “Now that we’re owned by AT&T, this upfront will be followed by a terrible reception,” quipped Conan O’Brien, kicking off a star-studded presentation. WarnerMedia assured media buyers in attendance that its upcoming streaming service will include ad-supported video on demand, not just ad-free content. WarnerMedia President of ad sales Donna Speciale talked up the data-driven offerings, which include targeting and location measurement capabilities that come straight from AT&T’s data set. For instance, McDonald’s tracked a double-digit lift in store visits after activating a first-party data target with WarnerMedia. And VW measured a 6.5% increase in dealership visits. Speciale encouraged buyers to start using data in television, adding to the 25 audience-focused campaigns going live in the first half of 2019.

PepsiCo is launching an in-house media planning and data team, led by director of marketing tech and data strategy Mike Scafidi. The group, which will shape the company’s digital media and ad tech strategy, is recruiting talent with CRM, data management, shopper marketing and ad tech backgrounds, The Drum reports. Its members will also be required to drive awareness and adoption of ad tech throughout the company, because one of the biggest challenges in launching an in-house team is selling the vision to stakeholders. PepsiCo has been moving marketing functions in house for some time, starting with social and creative. More.

Google’s Accelerated Mobile pages (AMP) is controversial among publishers. Some begrudge being forced onto Google’s content hosting platform or complain of unmet traffic goals. The AMP advisory board met a few weeks ago to discuss potential changes to the service, according to Terence Eden, a senior technology advisor to the British National Health Services and opponent to the AMP initiative. Eden’s notes from the meeting aren’t encouraging. He states that low-quality news sources embrace AMP and see traffic surge, while superior news publishers that worked on their own site-serving and tag technology are disadvantaged. “The meeting was good natured,” he writes in a blog post. “While there were some robust discussions, the (advisory committee) seemed fairly unified that Google had to seriously rework parts of the AMP project.” For more, see the official meeting minutes.