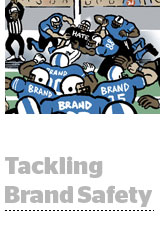 GroupM hopes to quell brands’ YouTube panic by partnering with OpenSlate, which analyzes individual YouTube videos and scores them for quality and brand safety. The solution is exclusively available to GroupM agencies and will open YouTube ads to third-party measurement for the first time, Recode reports. “Although it is not possible to eliminate all risks in user-generated media, our clients' hard-won brand reputations must be protected with the best efforts possible,” says Susan Schiekofer, GroupM chief digital investment officer, in a statement. “We appreciate that Google is enabling our work with OpenSlate to provide our clients with better brand safety controls, and we believe it's essential that all digital platforms carrying ad-supported user-generated content do the same."

Pinterest opened a new marketing program called Propel that offers extra support, insights and design help to any brand or agency that commits to spending at least $100 per day on Pinterest ads. It makes sense. Google and Facebook get big bucks from small businesses spending incrementally. And Pinterest also wants that kind of revenue from designers and manufacturers that “tend to be smaller companies and are willing to spend to grow,” writes Bloomberg’s Sarah Frier. More.

What does the agency of the future look like? Wolfgang, a new creative and strategic consulting hybrid shop, thinks it’s figured that out. Founded by ex-David & Goliath execs Mike Geiger, Seema Miller and Colin Jeffery, Wolfgang thinks enterprise consultants lack agency instincts. “The problem we see with, say, Deloitte or Accenture buying a creative shop is that they have completely different cultures and DNA,” Geiger said. “It’s very tough to integrate those two. It’s a bit like back in the day, when creative agencies were buying up digital agencies to become more digital by integrating them, and it never really worked.” So far, the agency has won over retail giant Uniqlo. More at Fast Company.

NBC quietly announced earlier this week that it will broadcast the 2018 Winter Olympics live around the world. This is an important change for NBC, which previously boosted ratings by waiting for prime time before airing the events. But widespread live-streaming means that events, results and marketable opportunities are slurped up by social media if they aren’t shown on TV at the same time. “Nothing brings America together for two weeks like the Olympics, and that communal experience will now be shared across the country at the same time, both on television and streaming online,” said Jim Bell, NBC Olympics president of programming. Read the release.