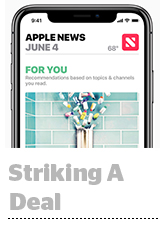 Too Big A Bite

Publishers are raging against Apple’s proposal that it take an outrageous share of revenues from a planned “Netflix for news” subscription product. Under Apple’s plan, a new paid tier of Apple News would allow subscribers to access unlimited content for a monthly fee. After Apple takes 50% of revenues, all publishers in the program would split the other half of revenue based on how much time users spend with their content on the app, The Wall Street Journal reports. The New York Times and The Washington Post haven’t yet agreed to license content to Apple News due to concerns over the revenue model. Publishers also fear they wouldn’t get access to data, like credit card information and emails, if their news is distributed through Apple. More. Related: Twenty percent of Apple’s services revenue come from traffic acquisitions cost paid by Google, but that number is starting to grow at a slower rate. More at CNBC.

The IAB Europe will release the second version of its Transparency and Consent Framework later this year, which it expects Google to join as a tech vendor once the update is complete, MarTech Today reports. The trade group needs a TCF version 2.0 “to accommodate requests from European publishers for more granular controls and more complete accommodation of the ‘legitimate interests’ legal basis,” IAB Europe CEO Townsend Feehan said in a statement. An integration with Google would be a boon for the digital media ecosystem in Europe, where many publishers and buyers are prevented from using data for personalized advertising because Google and the IAB Europe’s consent frameworks don’t sync. It would also be an important confirmation that Google, the industry’s legal and regulatory bellwether, believes the TCF is GDPR compliant. More. And AdExchanger has more about how Google’s delays impact the digital advertising landscape.

There are a slew of new subscription streaming services set to launch in the next year or so, including Disney+, an Apple media bundle and offerings from AT&T’s WarnerMedia and Comcast’s NBCU. But does the math work for streaming video? The Information digs into the numbers, concluding Disney would need about 37 million subscribers paying $9 per month to cover its subscription programming costs. That’s a tall order, but it would need another 200 million subscribers to cover its losses from pay TV cord-cutting. Disney will also pull shows and movies from other services, but that threatens its $4.5 billion licensing business. Then there’s the marketing costs to promote Disney+, acquire subscribers and retain trial viewers. Netflix doesn’t have to juggle competing concerns, but it was also $3 billion short of profitability last year, as even its market-leading new subscriber rate can’t overcome content and marketing costs. More.