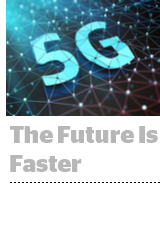 This year we’ll see the first wave of commercial 5G cellular networks, which will revolutionize smartphones and the Internet. Although the biggest societal benefits of 5G will come in areas such as remote surgery and connected cars, 5G will also be a huge growth and innovation driver for mobile apps, ecommerce, media and advertising. Carriers like AT&T and particularly Verizon are racing to be the first to transmit 5G to more than just a few test markets (though, small hiccup, people also need to buy new smartphones to receive 5G networks). The benefits of 5G sound almost unbelievable: movies downloaded to a phone in seconds, flawless mobile browsing, unprecedented video game speeds, near-perfect live streaming and more. But hold the phone: Mainstream adoption likely won’t happen until 2020 at the earliest. That’s when the 5G-enabled iPhone is expected to debut, reports The New York Times. More.

Comcast could be brewing plans to launch an OTT streaming service and enter a market already crowded with lots of big players, including Disney and AT&T. In December 2018, NBCU president Steve Burke sent a letter to employees teasing the possibility of a Comcast streaming service in 2019. Comcast has also been “overbuilding,” a cable industry term for entering a competitor’s territory, which means it could be launching a virtual MVPD, Business Insider reports. “If anybody in the classic MVPD space that’s not already doing it, like Sling, can launch a virtual MVPD outside of their own regions, I think Comcast has the opportunity and wherewithal to do it,” says Tim Hanlon, founder and CEO of The Vertere Group. More.

FrontFour Capital, an activist investor in MDC Partners, is calling for a shake up of the embattled holding company’s board. The hedge fund sent a letter to the board this week calling to replace three of its eight members, including former CEO Scott Kauffman, who stepped down in September. MDC Partners, which is exploring a sale, saw its share price crumble 75% over the past year under a heavy debt load and pressure from cost-cutting clients, reports The Wall Street Journal. FrontFour thinks new blood on the board will not only improve revenue performance, but also help supercharge the search for a new chief executive. More.