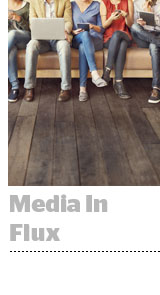 Facebook’s fickleness sunk LittleThings and Mic, and contributed to layoffs at Upworthy. When the social network stopped reliably sending readers its way, those publishers couldn’t hang on. Mic first saw traffic from Facebook decline, then the same network hit the knockout blow by not renewing a Facebook Watch deal that would have served as a lifeline.

Companies without a benefactor sought to hang on by diversifying. Publishers like Bloomberg, Condé Nast’s Vanity Fair and Wired and New York Media erected paywalls. Publishers like BuzzFeed sold products and others started affiliate programs.

Here’s a look back at the way publishing transformed in 2018.

February: LittleThings shuts down. The four-year-old producer of uplifting content distributed across social media saw its traffic plummet 75% after Facebook changed its algorithm to focus on content from friends and family.

March: Vice brought in Nancy Dubuc to serve as CEO. The former A&E Networks exec stepped in after the company faced allegations of a culture of sexual harassment and reportedly missed earnings projections of $805 million by more than $100 million.

May: Bloomberg adds a paywall.

June: Biotech billionaire Patrick Soon-Shiong completes his purchase of the Los Angeles Times and The San Diego Union-Tribune from Tronc. He calls fake news a “cancer of our time,” and plans to mount a West Coast alternative to The New York Times and The Washington Post.

July: Bryan Goldberg scooped up Gawker in a bankruptcy auction for $1.5 million, the first of two distressed media properties he’d bring into his fold in 2018.

August: Upworthy lays off 40% of staff, or 31 people, and president Eli Pariser and editor-in-chief Liz Heron left. Like LittleThings, it also saw traffic drop due to Facebook

October: Lenny Letter, the newsletter founded by “Girls” creator Lena Dunham and Jenni Konner, shut down after three years. Condé Nast and Hearst had sold ads for the feminist publication.

November: After laying off its editorial staff, Mic sold for $5 million to Bustle Digital Group. The sale represented a 95% drop from its previous valuation of $100 million. “The company simply failed to reach scale with an audience,” opined AdExchanger contributor and Tubular Labs CEO Rob Gabel.

November: BuzzFeed CEO Jonah Peretti floats the idea of a digital media merger in an interview with The New York Times. Peers like Vice, Vox Media, Refinery29 and Group Nine could band together to negotiate with Facebook and Google, he said.

November: Rookie Magazine, an eight-year-old magazine for teen girls, closed its doors. Founder Tavi Gevinson decided not to take on funding, ask for subscriptions, pivot or scale – and was left with the option to close down, integrity intact. “Digital media has become an increasingly difficult business, and Rookie in its current form is no longer financially sustainable," she said.

November: To diversify revenue, New York Media reveals plans for a paywall and makes a push to bring in more programmatic revenue.

November: Three years after acquiring Recode, Vox Media folded the site back into Vox.com. Traffic for the standalone brand had declined by half.

December: Verizon takes a $4.6 billion writedown on Oath unit, three months after its head, Tim Armstrong, said he would leave at the end of the year, and six months after $658 million in writedowns from Go90’s failure. While most other publishers struggled this year because they lost access to social media distribution, Oath floundered because Verizon decided not to connect its mobile carrier data to Oath’s content – a vision that AT&T is pursuing with Xandr and WarnerMedia.