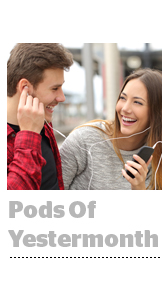 Listening to podcasts can be an ideal way to pass the time during the holidays, a pleasant distraction while wrapping presents or giving the dog its fourth daily walk to escape hearing your nephew Brandon wearily explain another meme to the old folks.

We’re here for you.

The A To Z On Amazon. The AdExchanger team scrutinizes the history and future of Amazon as an ad platform – from one decade ago, when it struggled to convince media planners to buy a banner ad, to today, as the owner of some of the most coveted and exclusive data sets. (The Big Story)

AdExchanger Talks Episode 100! With Facebook Ads VP Mark Rabkin. In addition to being our century episode, this discussion marks Facebook’s first time on the podcast. Rabkin, VP of ads and business platform, talks about the company’s “pivot to meaning” for consumers and brands, the rise of Stories, Facebook’s super-dense ad auction and how the company aims to earn back user trust after a string of data security failures. (AdExchanger Talks)

The Strange Case Of The Vanishing Media Agencies. The temperature is cooling, the leaves are falling and the skies are turning the color of slate. It’s a time for mystery. This week on “The Big Story,” the team investigates the baffling situation of the missing media agencies. (The Big Story).

Dave Morgan Looks Back On 20 Years Of Startup Life. Simulmedia CEO and founder Dave Morgan is no stranger to launching startups in the ad tech space. In this episode one of the digital ad industry’s most accomplished serial entrepreneurs shares observations from his career and describes Simulmedia's progress. (AdExchanger Talks)

Closing Out The Year With OpenX And Google. Sarah Sluis, who wrote about OpenX’s recent layoffs, looks at the challenging road ahead for the company, as well as OpenX’s peers, which have made similar transformations as supply-side ad tech becomes more constrained. (The Big Story)

Fuel For The Holidays. AdExchanger’s November expose on Rocket Fuel’s misuse of client data was among our most popular stories of the year. In this episode, the team discusses what Rocket Fuel was up to, what can be learned from its fall from grace and how that story came to be. (The Big Story)

Roku Like A Hurricane. SVP and platform GM Scott Rosenberg tells the Roku story and describes in detail the ad model that has helped the company compete effectively against the likes of Apple, Amazon and Google. (AdExchanger Talks)