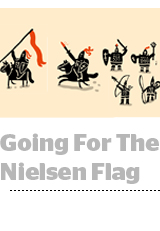 It’s a tumultuous month for Nielsen, which is trying to re-up measurement contracts with many broadcasters that have threatened to bail. Hearst has renewed with Nielsen to measure its local TV stations, but Variety reports that CBS is threatening to scrap its contract, which is worth about $100 million this year. Is the network just posturing for a better deal? It’s possible, but with Comscore and proprietary solutions such as CBS’s own recently launched DNA measurement product, talk of dropping Nielsen may not be as crazy as it once was. More. Related: Gray Television, a local broadcaster that would have a much smaller licensing deal than CBS, dropped Nielsen for Comscore, according to TVNewsCheck.

Despite the constant scandals, marketers haven’t stopped spending on Facebook. But there is grumbling in the ranks, The Wall Street Journal reports. “It’s about time we take a collective stand against the egregious behavior of Facebook,” Mat Baxter, global CEO of IPG Mediabrands-owned Initiative, wrote in a LinkedIn post Wednesday. “I will be advising clients to stay off the platform entirely – hopefully, when they feel the pain of lost advertising dollars things might just change.” But eMarketer Principal Analyst Debra Aho Williamson voiced skepticism. “Facebook has become an integral part of many advertisers’ media plans and it’s very hard to simply turn off the spigot,” she said. More.

Gifts That Keep On Giving

A tweak to Apple’s App Store developer guidelines could open up a major new revenue source. Currently, iOS users can purchase a paid app as a gift, but the new rule would allow in-app purchases to be gifted to another person, MacRumors reports. It’s unclear how this in-app gifting will work in practice, but as Apple increases its media subscription business and as games like “Fortnite” show how much potential revenue exists in in-game markets or user-to-user transactions, Apple will encourage that business (and make sure it gets its 30%). More.