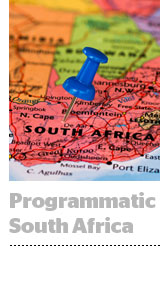 In recent years, publishers like MSN, Hearst and Forbes readily set up private marketplaces for Hitch’s clients. But local publishers, whose content directly addresses the South African market and supports the local economy, aren’t yet willing to transact programmatically.

But Hitch Digital started setting up private marketplaces in July with 365 Digital, which has gotten local publishers like iAfrica, Sharenet, Justmoney, Shazam, 947, Food-Blog, EWN and KFMTK to test out private auctions, guaranteed and preferred deals. Because it can aggregate multiple publishers, it creates a critical mass of scale for advertisers.

“Our local publishers aren’t seeing the value of programmatic just yet,” said Leigh Hitch, founder and CEO of digital agency Hitch Digital. “It’s very much the mindset of open exchange, ‘cheap and nasty,’ ‘won’t give me great yield,’ ‘competes with my sales force’ – the things that everyone has been through.”

365 Digital promises to operate a transparent marketplace, according to its commercial director, Julian Jordaan. Both the buyer and seller wield control over ad and content quality, pricing and inventory types. 365 Digital built out the marketplace using AppNexus and Google to accommodate buyer and seller technology preferences.

Hitch Digital has already set up about 10 private marketplaces using 365 Digital, some focused on specific content areas like sports, news, business and entertainment. Any of the 125 clients on its roster running programmatic can use deal IDs. Hitch’s clients include global brands like Red Bull, Pepsi, Levi’s, New Balance as well as a local bank and one of the largest alcohol brands in South Africa.

Running private marketplaces gives Hitch Digital’s media team much more flexibility to optimize a campaign on the fly, Hitch said. The team can cycle through a number of prospecting tactics, for example, and shift budgets without having to constantly revise IOs.

“Private marketplaces allow us to reward whatever supply is working at a given time,” Hitch said.

The establishment of private marketplaces shows that the South African programmatic market is maturing, Hitch said. But obstacles remain.

Many of South Africa’s largest digital media brands are owned by conglomerates. Because digital represents such a small portion of revenue, they are less likely to want to experiment with programmatic and private marketplaces.

Buying programmatically requires heavy technology expenditures. Hitch Digital operates in a dozen African countries, and CPMs often average quite low. “There can be times where the cost of the technology is 200% what you are paying on media,” Hitch said.

He would like to see publisher sales teams focus more on content creation and sponsorships and understand how their data and an advertiser’s data can enrich the value of display inventory – which he prefers to buy programmatically.

“The market thinks of programmatic as a way to get a lot of inventory at scale for a cheap price,” Hitch said. “That’s missing a lot of the clever things we can do with data in programmatic.”