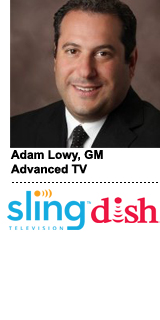 Connecting the pipes for programmatic monetization across Sling TV, Dish and Dish Anywhere didn’t happen overnight, but Adam Lowy, GM of advanced TV, said years of work are paying off.

Dish has been “quietly refining” Sling TV’s integration into larger programmatic stacks over the last few months, including integrations with several new demand partners like Adobe.

Sling TV uses Tremor as its supply-side platform and Comcast’s FreeWheel as its ad server. Adobe’s Audience Manager is its data management platform.

More than 1,000 advertisers have worked with Sling TV since its launch in 2015 and its retention rate is now over 50%, Lowy claims.

He plans to triple the size of his 10-person team at Dish and Sling TV over the next few months, doubling down on sales, data and analytics and operations roles.

“Being so early in the space [to bundle live programming from networks like ABC and ESPN], we were one of the firsts to define how ad monetization and ad revenue would work within live, linear programming as both an operator and distributor,” Lowy said.

“The easiest way to scale the business is to leverage our relationships with agencies, but there’s more and more talk with DSPs or different groups in the supply chain,” he added. “I like to say that if we follow a tag in the ad buy, there’s so many different paths it can go down – from the DSP to the agency trade desk to even the creative.”

Sling TV manages most of its ad decisioning at the ad-server level. It supports impression-based buying, and enables targeting based on first-party demos, geographic location, program genre, network or device.

Sling TV can also match its subscriber list to an advertiser’s (or append third-party data) to pull off cross-platform addressable targeting where a buyer can, for instance, reach a mom with kids who lives in a certain area of the country who has a mortgage.

“You can be in pretty much any pod and any position by dynamically inserting ads and that works on a percentage basis against that inventory,” Lowy said. “Some networks choose to keep their television feed intact and get the C3 credit from Nielsen. In that situation, we run ads in the 15 and 45 mark like traditional MVPDs, but we do dynamically insert all our ads.”

Sling TV hopes to develop a traditional-looking ad sales structure, diversifying its yield with a combination of direct sales, addressable and targeted/ programmatic.

One issue Sling and other streaming TV providers must overcome is shoring up enough demand in a still-nascent over-the-top space.

That deficiency too often results in an oversaturation of existing creative or improper frequency caps and ad rotation.

“My answer is there needs to be more demand,” Lowy said. “People also need to figure out the metrics. We use first-party impressions from FreeWheel that are MRC accredited and people are fine with that, but how long that will last?”

Lowy thinks demand will scale as buyers become more accustomed to OTT buying beyond TV GRPs and as emerging metrics are standardized.