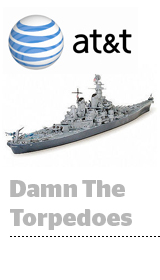 Despite government opposition to AT&T’s proposed merger with Time Warner, the companies are full steam ahead building out an ads business to rival Verizon, Facebook and Google. AT&T hired PubMatic President Kirk McDonald as CMO of its new ad unit last week, a few months after bringing on GroupM vet Brian Lesser to lead the new unit [AdExchanger coverage]. Meanwhile, regulators are pushing Time Warner to divest its Turner or DirecTV assets, both of which are seen as crucial to ”build an automated advertising platform that can do for premium video and TV advertising what the search and social media companies have done for digital advertising,” as AT&T CEO Randall Stephenson described in August. More at Variety.

Facebook is relaunching its local search and review app. Its predecessor app, called Events, struggled to gain traction and shuttered with only around 100,000 downloads. The goal is to “make it a lot easier to do certain kind of looks [sic] ups that are very common when making plans with friends,” Facebook product manager Aditya Koolwal tells TechCrunch. He says advertising isn’t on the agenda (yet) for the Local app. But it could provide valuable location data, brick-and-mortar attribution features and performance marketing integrations with Facebook’s “Order Food” feature. More. Facebook tried and failed once on a standalone competitor to apps like Yelp and Foursquare, but apparently it’s not done with the idea.

The startup acquisition market may be off this year, but “there is an enormous amount of purchasing power latent in the market,” writes Redpoint venture capitalist Tomasz Tunguz. The cash on public software company balance sheets is more than $8.5 billion, roughly doubling in the past three years. The combined market cap of public SaaS companies is now above a quarter trillion dollars. “If we conservatively assume that 10% of the market capitalization (stock) and 50% of the cash could theoretically be used for acquisitions, and ignore debt, the aggregate purchasing power is roughly $29.5 billion – sufficient for 30 enterprise unicorns,” Tunguz says. And that doesn’t include tech giants like Google, Amazon, Facebook, Microsoft, Oracle and SAP that “would increase purchasing power by whole number multiples of the estimate above.” More.

It’s On For Yuan

Chinese company ByteDance Technology Co., which owns media startup Jinri Toutiao, has acquired lip-syncing app Musical.ly for $800 million in one of the largest acquisitions abroad by a Chinese startup to date. Through Musical.ly, Jinri Toutiao will gain access to an audience of 100 million young Americans and a viral social media property [AdExchanger coverage] to augment its news content. It will also gain Live.ly, Musical.ly’s live streaming app, which has original content deals with Viacom and NBCU. Jinri Toutiao, valued at $20 billion, is one of the few Chinese media companies that’s managed to thrive without backing from Chinese internet giants Tencent, Baidu and Alibaba. Bloomberg has more.