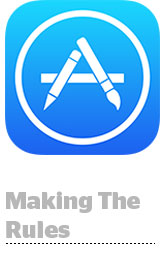 Tip Of The Iceberg

Apple has faced opposition in China, but it’s still the single biggest market for the App Store, passing the US last year. “Now, its effort to wring more revenue from Chinese iPhone users may be setting the company up for more trouble,” writes The Wall Street Journal. Chinese social networks allow small mobile wallet transfers between a user and a site or content creator. Apple will now treat those mobile cash exchanges like in-app purchases, entitling the App Store to a 30% fee. The most popular mobile browsers and platforms in China come with default ad blocking, a trend driven largely by data restrictions, so the “tips” Apple is staking a claim to are a meaningful part of the homegrown Chinese mobile ecosystem. More.

Facebook is paying make-goods to some advertisers after disclosing that, for over a year, it had miscounted a mobile video ad format. While the impact from a financial perspective was small – just 0.04% of ad impressions on the platform – Facebook’s public concession is a sign that it might be ready to give spenders a little more insight into what’s going on behind its walls. “It’s just another little chink in the concrete of their walled garden,” one advertiser tells Ad Age. “And it’s an additional reason why they need to be compliant with third parties to measure them.” More.

Uber has been selectively testing “route-based pricing,” which charges customers based on what the ride-hailing app thinks they’re willing to pay – not just mileage, time and demand. “For instance, someone traveling from a wealthy neighborhood to another tony spot might be asked to pay more than another person heading to a poorer part of town,” Uber product head Daniel Graf tells Bloomberg News. Dynamic pricing, which has been disputed in court, has crept into more commerce lately, from roadside gas prices to online deals based on algorithmic expectations for a shopper’s wealth and spend ceiling. Uber also must consider the impact on its brand perception. “It’s a very dangerous moment for them, but there are good economic reasons to do it,” says Glen Weyl, a senior researcher at Microsoft studying Uber with the startup’s cooperation. More.

Google AMP powers more than 2 billion mobile pages and 9,000 domains. So now is the time for the search giant to double down on AMP Ads, which connects mobile inventory with ad-buying vendors like Celtra, TripleLift, AdZerk and Dianomi (read the blog post). Not everyone is amped up about Google’s lucrative new mobile initiative. “Content shown in Google’s AMP view is stripped of all branding as if the content were from a legitimate news agency,” per a column at The Register. Aside from the diminished brand value, AMP pages are also stripped of non-Google analytics and force publishers to cut back on heavy-loading content like interactive maps or photo galleries. But there’s seemingly no slowing AMP, which boasts important new content partners and can practically dictate terms to the market because of its search dominance. More at TechCrunch.