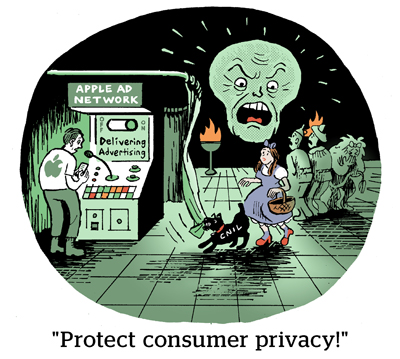 Nothing beats the holidays for first-party data gimmicks, but summer is putting on a show.

On Friday, Cheetos, a Pepsi brand, announced a giveaway for “fannie macs” – as in fanny packs for summer festivals that neatly fit one container of Cheetos-branded Mac ‘n Cheese. All fans need to do is follow the Instagram account, tag a friend and use the branded hashtags. (Oh, and the lucky winners fork over their address, of course!)

The Kellogg’s-owned Cheez-It brand had a runaway hit last month with novelty-size Cheez-It tacos exclusively on sale at Taco Bell, while McDonald’s and Sprite took a more traditional approach for their collab: free Sprite in exchange for using the McDonald’s app.

Some first-party data plays, meanwhile, aim for the heart but hit in the stomach, like Applebee’s, which CMO Joel Yashinsky says “is known for first dates and wings.” ( … Is it, though?)

Anyway, the restaurant chain Applebee’s partnered with makeup brand Winky Lux on a collection of four lip glosses inspired by Applebee’s wings flavors. A companion campaign on TikTok is pushing a “Taste My Face” trend.

“We are so excited to partner with Applebee’s in such an unexpected way,” says Natalie Mackey, CEO and co-founder of Winky Lux. “What could be more genuine and fun than spicing up a kiss with our delicious Saucy Gloss!”

The Worm In The Apple

Isaac Newton be damned, because Apple is “defying gravity and powering through the early stages of the macro downturn,” according to Gene Munster, an analyst at Loup Ventures.

This was a tough quarter for Facebook and Google, both of which experienced advertiser pullback. Apple also saw a downswing in ads, but still exceeded analyst expectations on the strength of its iPhone business, with an assist from other services revenue. Apple reported $83 billion in total revenue for Q3 2022, beating projections by about $300 million.

Apple’s services business, which includes advertising, iOS developer fees and subscriptions to Apple TV+, Apple Gaming, Apple Music and iCloud, pulled in $19.6 billion, up 12% from last year. Across all services, Apple added a net 160 million new users over the past 12 months.

And “there are some pockets of weakness, primarily in digital advertising, that we will need to work through,” said Apple’s CFO Luca Maestri.

The 2024 US presidential election will be a tightrope for email providers and wireless carriers. (This year is the dress rehearsal).

Targeted Victory, a conservative media shop, published a blog on the disparity between Gmail’s filtering of emails from Democratic politicians (10% to spam) compared to Republicans (77%). The issue also cropped up in 2020 when wireless carriers shut down President Trump’s July 4th fundraising text kickoff.

The disparity is stark, but there’s a reason why. Fact is, conservative fundraising is backed in large part by profiteers, often even unabashed bad actors.

Carriers warned political marketers that unsavory practices would be blocked. But the Trump campaign blasted look-alike texts with misleading calls-to-action and no regard for frequency capping – exactly what carrier spam filters look for.

And here we go again. Since last July (when the Trump campaign’s text fundraising was first flagged as spam), the Trump fundraising operation went from sending three messages per day on average to 14 now.

Democrats aren’t perfect in their practices, though. Although they claim to observe the rules set out by carriers, they push those rules to their limit. For example, rather than do automated blasts, some campaigns recruit volunteers to send near-copycat text messages, which isn’t a direct violation.

How streaming stars pay the price of online fame. [NYT]