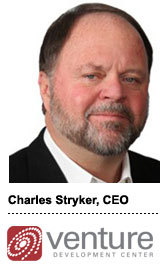 A mover and shaker in the field of data-driven marketing, Stryker founded and led legacy database marketing companies like Trinet in the 1970s and Naviant in the 1990s and early aughts.

Dr. Stryker founded VDC in the ’90s, and the center soon amassed a client list that’s a veritable who’s who of data-driven marketers and marketing companies: Acxiom, IBM, Nielsen, BlueKai, eXelate and 24/7 Real Media, among others.

But Stryker was also revered as a great friend and mentor, and many executives in the advertising industry will continue to feel the personal and professional impact of his expertise and counsel for years.

Scroll down or click on the link to see the remembrances from Stryker’s friends, colleagues and proteges.

“I first met Charlie as chairman/CEO of Naviant during the early days of the internet in the late 1990s. Charlie was at the forefront of seeing the power of data in online marketing, risk management and countless other applications. He may not have coined the term ‘big data,’ but he lived and breathed big data before it became a hot topic.

Charlie was brilliant with great ideas and entertaining with humorous stories. In a typically self-deprecating style, he once confessed to me his lack of sports knowledge. Charlie somehow thought a Kansas City taxi driver who apparently was going on and on about [Kansas City Chiefs running back] Marcus Allen was referring to a type of cheese. ’Where can I buy some of this Marcus Allen?’ Charlie asked at the end of his ride.

The data world is in mourning. I feel like I have lost a mentor. My heart goes out to his family and his colleagues and my friends at VDC.”

“I met Charlie as a student of his during Wharton’s MBA program in the mid-1990s and worked in his consulting practice for most of the following 10 years. He was my most important professional mentor during those early years.

Evolving from a hardcore engineering background, I learned how to drive business innovation and monetization from Charlie by employing a cross-functional skill set (conceptualize, plan, sell, lead, etc.) and by being fearless and relentless as meaningful revenue success for your clients, employers and partners demand it.

Just about all who know Charlie well agree on his kindness, fairness and healthy dose of humility. His faith in me early in my career meant an immense amount. We shared a lot of time together, working, attending client meetings, traveling, even flying in his plane. Having lost my father as a teenager, those times with Charlie were instrumental to my maturation as a man and business executive.”

“I met Charlie in 1995 and he became a good friend and colleague quickly. When I took 24/7 Media public in 1998, I recruited him to be on the board for his ‘database marketing acumen.’

In those days, no one was thinking about internet database marketing and it was an important part of the roadshow presentation. The interesting item is that it took about five years, after we went public, to actually deliver on that promise.

Meanwhile, Charlie told me a story that I have been retelling for years. And it is about an idea that he had approximately 25 years ago.

Charlie had great ideas for commercializing data and this one seemed to be a winner. In those days, data was used for telemarketing, direct mail and personal sales calls. Charlie decided to put a list together of those that were recently deceased [in the US]. The idea was to cross-reference mailing lists with that of the deceased so that the response rates would increase as ‘dead people didn’t buy anything.’ As was the case then and still today, the client would test a subset to verify the results they could expect should they market to the entire list.

The test actually showed that the ‘deceased list’ performed better than the ‘live people list.’ Why? He didn’t know, but speculated that Aunt Martha was opening Uncle Ernie’s mail, saw an offer that she felt was really special and responded.

Ultimately, the lesson was things are not always as they seem; that logic does not always apply to database marketing and only through regular use and manipulation can you achieve the results the client desires.”

“I’ve known Charlie for more than 20 years. He was an adviser when I was president and COO of Harte Hanks. And he was the one who persuaded me to leave Harte Hanks.

‘This job is killing you. … Leave and we’ll buy something.’

Charlie immediately helped me land consulting engagements while we looked for something to buy.

And that something turned out to be the data and content businesses of Harte Hanks: Aberdeen. Charlie introduced me to Halyard Capital and the three of us closed our deal in April 2015.

During the past three years and, for that matter, over the entire 20 years I’ve known Charlie, he has been an encourager and a source of tremendous ideas. And the thing is, there are dozens of people like me that Charlie has encouraged and inspired.

He will be so missed by so many.”

“I first met Charlie back in 1987 when my firm, Interactive Marketing Group (IMG), did some work for his company, Trinet. After 20 years of building and running IMG, I sold it in 2006 and began looking for my next adventure.

At the age of 46 I reconnected with Charlie and immersed myself in his vision. It is not often that you have opportunity to reinvent yourself with a mentor such as Charlie at that time in your career, but the relationship grew stronger with each passing day. We complemented one another on numerous levels and VDC has grown from an alliance of freelance contractors to a pre-eminent force in the world of big data.

I have lost a friend, confidant and mentor and am devastated by the senselessness of it all – and it is still seeping in. As I write this, I continue to wait for my mobile to ring with the ‘Dr. Data’ ring tone that would come up no less than four times a day.

We spent a lot of time over the last two weeks finalizing plans for our upcoming event, VDCConnect2017. He told me last week he wanted to walk out on stage to Sting’s ‘Every Breath You Take’ and asked if I could have it timed such so that it was at the part in the song where Sting sings, ‘I’ll be watching you.’

He of course was making a Charlie-style joke about the data that VDC has access to and how it provides such insights. But he was serious and asked if we could get that done because it had to be at that exact point in the song. My answer was, ‘Of course I can, Charlie.’ How odd, how bizarre, how fitting.

So, now the tears are back, and as I look around for Dr. Data, I say aloud, ‘No need to worry Charlie, the torch is passed and the vision will be realized.’ And, I am sure I hear back, ‘I know that, I’ll be watching you.’”

“Charlie touched the lives of many in the business of data, including me and so many others at Acxiom over the years. His smarts, energy and wit were unequaled as an adviser. His integrity, humility and empathy were unequaled as a friend.

When we engaged him at Acxiom 12 years ago, we were an old-line offline data company. He helped us understand what was possible in the digital world, thereby kick-starting the company’s journey to today’s digital powerhouse.

At Acxiom, we regularly had Charlie talk to customers regarding the business of data. It is no overstatement to say that those talks helped launch dozens of initiatives for Acxiom and its customers. And it is not embellishing to say that despite having seen him dozens of times, I never failed to learn something new from him.

Our industry has lost one of its finest – and I, a friend and mentor.”