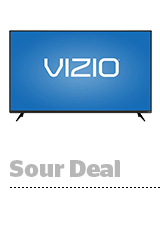 Data Do It Or Data Don’t?

Smart TV manufacturer Vizio is suing MediaMath for no less than $900,000 in unpaid bills, Digiday reports. Vizio wants an audit of MediaMath’s gross revenue to figure out how much the specific sum actually is. The suit claims that MediaMath entered into a 15 month contract with Vizio’s data selling unit, Inscape, that required MediaMath to make minimum guaranteed payments and send reports to Vizio. MediaMath, according to the suit, did not pay anything and in May tried to renegotiate the deal in an effort to draw out the payment terms. Vizio didn’t comment to Digiday, but MediaMath did, saying through a spokesperson that the Vizio data wasn’t used enough by clients to trigger the minimum guaranteed payment.

A Paris appeals court has ruled that Google must open payment talks with publishers, The New York Times reports. The court is upholding an order by French antitrust regulators requiring Google to remunerate publishers for the right to display headlines and snippets of their news articles. Google will be required to negotiate directly with French news outlets over just how much they owe for using their content. The move comes after the EU passed new copyright rules last year requiring Google to pay up to display story summaries. Australia is in the midst of developing a similar rule that would affect Google and Facebook. The French appeals decision is only the most recent development in a very long media war over how money is derived from online content. Google and Facebook have both long argued that they shouldn’t have to pay, because their services drive significant amounts of traffic to news sites. Even so, Google said last week that it plans to shell out $1 billion to publishers over the next three years in exchange for displaying their content.

Malicious Android apps have been displaying ads that make it appear as if they originated from legitimate, popular applications and social media platforms, such as YouTube and Chrome. The ads were served onto a mobile device when users were not actively within the app. Spoiler alert: It was fraud, of course. The cluster of more than 240 apps, which was discovered by ad fraud detection firm White Ops, led to more than 14 million downloads of low-quality apps, most of which were nothing more than Nintendo emulators ripped from legit sources or from junky games. At its peak, RAINBOWMIX, which is what White Ops christened the scheme, had more than 15 million ad impressions a day. The name RAINBOWMIX is a nod to the 8-16 bit color palette used in retro video games of yore. Guess that’s one of the perks of uncovering a fraud scheme – you get to name it. White Ops detected the first signs of RAINBOXMIX activity in April. Google removed the apps from the Play store over the summer.