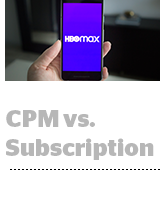 Are you ready for some ads on HBO Max? The ad-supported tier is coming in Q2 2021, according to agency execs speaking to Digiday. And it might come even sooner than that, possibly debuting with the NCAA’s March Madness. As per Digiday, HBO Max wants advertisers to spend at least $250,000 per quarter. But with HBO Max’s high CPMs, Tim Peterson of Digiday warns that buck isn’t going to stretch very far. No word on what those CPMs are exactly, but Digiday sources say they’re comparable to prime-time TV, so, likely around $80. It makes sense that HBO Max CPMs would be high, given that it will deliver lighter loads than traditional TV: four minutes of ads for every hour of programming, and two minutes per hour of movies. It’s interesting to note that WarnerMedia’s pitch is different from NBCU’s pitch for Peacock. Rather than seeking out a small number of exclusive launch sponsors that would pay tens of millions of dollars, WarnerMedia is looking for a broad array of advertisers to run ads across HBO Max.

Companies are lining up to earn a new global brand safety seal developed by the Trustworthy Accountability Group (TAG) and the United Kingdom’s Joint Industry Committee for Web Standards (JICWS). TAG and JICWS merged in late July. More than 100 companies, including Amazon, Facebook, Google, GroupM and Walmart, have already undergone the requisite independent third-party audit, which ain’t cheap. It costs $10,000 a year to maintain the certification. Certified brands must also agree to appoint a designated TAG compliance officer who pledges to attend annual brand safety training and facilitate internal reviews. It’s been a tumultuous year on the brand safety front. When the pandemic hit, brands rushed to block keywords related to COVID-19, and some publishers avoided news content altogether. The program is “just one more big step down the path of protecting brands in the digital space,” TAG CEO Mike Zaneis tells Adweek.

New data from privacy research firm ProPrivacy found that 92% of the top 100 charities in the United Kingdom do not fully comply with GDPR and the ePrivacy Directive. According to ProPrivacy’s findings, many “failed spectacularly” by employing opt-out forms that didn’t actually have any impact on tracking behavior. Others, including Save the Children and the British Red Cross, placed ad trackers before users were able to express or deny consent. ProPrivacy also found that nearly a quarter of the top 100 UK charities have shared data directly with data brokers, and that 31% of the most popular charities in the country, many of which deal with sensitive topics, such as end of life care, gambling addiction and mental and physical disabilities, use trackers. Eighty-nine percent drop DoubleClick cookies. Read the full report.