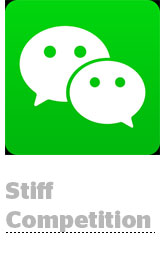 Getting To The Next Level

WeChat owner Tencent is gaining ground against Facebook. Monthly active users (MAUs) grew 28% year over year to 889 million, the holding company said during its earnings report this week. In contrast, Facebook MAUs grew 17% in 2016 to 1.86 billion. Tencent added targeted ads in WeChat’s “Moments” section, one reason online ad revenue grew 40% from the previous year. But Tencent isn’t just about messaging. It bought Supercell last summer to bolster its online gaming presence, and it will increase its game offerings in the coming year. Read more here and here.

Rubicon CEO Michael Barrett is earning a $515,000 salary in his new gig, and can double or triple it with his end-of-year bonus. And, of course, he received plenty of stock incentives that will vest over time. He received 634,780 stock options with a strike price of $5.80. And 1,099,138 restricted stock units, worth approximately $6 million at today’s trading price, also will vest over time. More than 219,000 shares of those restricted stock options will vest at at the end of the year. Read the SEC filing.

Is Your Safety On?

YouTube’s explosive growth has complicated its ability to police brand safety, said Alphabet Executive Chairman Eric Schmidt to Fox Business Network’s Maria Bartiromo. Yes, every so often an ad slips through Google’s algorithms and shows up alongside content it’s not supposed to. But Schmidt emphasized that brand safety considerations can still be automated. Brand ads next to objectionable content or fake news are the result of “a ranking problem,” he said. For instance, since Google can determine relevancy, it should also be able to detect whether content is “malicious, misleading and incorrect.” Schmidt also noted a lag between the time such content is identified and when it is actually shut down: “We certainly can see it. The algorithm for shutting it down, or de-ranking it, takes a little more time.” Read more.

It’s a tug-of-war for your personal financial data! On one side, the big banks. On the other, tech companies like Mint and Betterment, which require consumer bank account access to function. But recently banks have made it more difficult to grab that financial info, claiming they’re worried about how those tech companies are using consumer data. The tech companies claim the financial institutions are really worried that startups will soon offer services competitive with the banks. As The New York Times points out in its report: “The clash over personal financial data points to a broader recognition that personal digital records are among the most valuable currencies in the increasingly digital economy.” More.

Shop Your Face Off?

Its buy button was a flop, but Facebook is still trying to position itself as a conduit for commerce. It unveiled an ad format Thursday called “Collection,” designed to nudge consumers down the funnel by combining video with product pictures. It’s like TV meets a product catalog. But you can’t actually transact within the unit. When a user clicks, they’re directed to a point of sale, either on the advertiser’s site or a mobile app. Facebook’s track record with transactions is iffy. But Facebook noted three in four consumers say watching videos on social media influences their purchasing decisions. Recode has more.