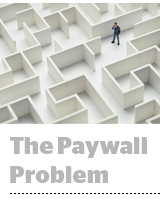 Many TV companies have developed their own measurement solutions – some to augment the Nielsen standard and some to replace it. And Hulu is up next, Ad Age reports. Hulu expects a current beta attribution product to launch in the second half of this year (in time for upfronts). “TV has been reliant on the fact that everyone sort of knows it works and it gets broad reach,” says Julie DeTraglia, VP and head of research. “But TV no longer gets the reach it used to and it has gotten to a point where TV has to prove itself more like digital does.” More. Hulu has ramped up its programmatic business lately. It recently hired Jeremy Helfand as VP and head of ad platforms and introduced a self-serve PMP last month.

Bouncing Off The Walls

There’s a disconnect between news companies rushing to institute paywalls and the appetite of readers for such offerings. A report by the Reuters Institute predicts the growth of mobile and browser downloads that circumvent metered paywalls, Business Insider reports. “We are definitely sensing we're in much stronger company,” says Marina Haydn, a managing director of circulation for The Economist. “That will impact all publishers as we're competing for similar audience and people's time.” Publishers are adding subscribers, but the big wave of news sign-ups in 2016 and 2017 is now in a churn and retention period, and smaller or unprofitable outlets may not be able to weather even short-term losses in page views. More.

One week after Pivotal Research issued a remarkably bullish prediction on Amazon, Cowen has released results of a survey of leading US ad buyers that appears to reinforce that view. “Amazon could double its ad revenue among top US ad buyers in the next two years, giving it 12% of total digital ad spending in 2020. Meanwhile, Facebook’s main social network platform is expected to lose 3 percentage points of market share in that time,” Recode reports. Most of the new Amazon money will be siphoned from other media outlets (rather than net new dollars). Read the story, including a snazzy chart.

The Epic Games Store, a gaming marketplace launched last month, is lining up game release deals with Ubisoft. Adding more top-tier game studios could make the store a hit for Epic, developer of the popular game Fortnite. Fortnite alone is reported to have exceeded $3 billion in profit in 2018 from in-game purchases and upgrades. “While running Fortnite we learned a lot about the cost of running a digital store,” Epic founder and CEO Tim Sweeney told video game trade MCV when the store launched last month. “In our analysis, stores charging 30% are marking up their costs by 300-400%,” he said, while Epic’s store will be profitable at 12%.