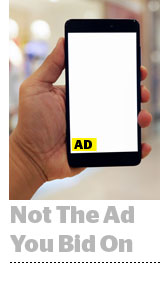 Ad buyers need to be on the lookout for a new problem called “declaration fraud,” where buyers paying for full-screen mobile video ads instead get itty-bitty versions that take up less than 5% of the screen.

The trick takes advantage of the same loophole sellers used to spoof domains prior to ads.txt.

Here’s how it works.

Bid requests assume publishers and exchanges supply accurate information about the ad unit, including the site URL, ad size, location and page context. Buyers must take the sellers’ word that the information is true, allowing unscrupulous ad providers to lie and claim they’re selling a vintage Porsche instead of a junkyard jalopy.

By looking at the site’s source code, AdExchanger observed bid requests for 640×480 or 640×360 video sizes on either SHE Media, Mediavine or CBS Interactive’s CNET. Instead, the ads ran on the right-hand corner of the mobile screen or as a 300×250 in-stream box.

It’s difficult to know if this discrepancy is intentional. Some exchanges inflate video sizes to make inventory look more appealing to buyers. But legitimate technical issues can also make it difficult to know what kind of inventory a buyer is purchasing.

SHE Media and Mediavine both said technical hiccups were responsible for their mistakes. CBS Interactive did not respond to a request for comment.

Because it’s hard to create bid requests with many different ad sizes, SHE Media sometimes needs to “select a common denominator” that will be “compatible across hundreds of different combinations of browser, bidding, device and bandwidth,” said Ryan Nathanson, SVP of operations for SHE Media, a blogging network that passed in incorrect sizes.

Similarly, Mediavine said it passed a single, large-player video size in its bid requests due to limitations in the video Prebid spec, which it fixed after it updated to a new version of Prebid after exchanges started flagging the issue. It summarized the problem in a blog post after AdExchanger reached out.

What buyers can do

In order for buyers to protect themselves against a mismatch in video player size – whether intentional or accidental – they need to compare the video size in the bid request to the one rendered.

Not all third-party reporting can easily spot declaration fraud. Integral Ad Science said it doesn’t offer the ability to compare the size of the video that appears vs. the video size purchased in its user interface, except by looking at log-level data. On Moat, multiple buyers said “render size” is a custom field, so users need to call up their tech provider to get it added.

When programmatic traders do access this information, they’re in for a manual, time-consuming task. Plus, as a “post-bid optimization,” buyers are only able to fix future campaigns, and tally up the wasted or mis-bought media in the current one.

Agency awareness of this issue varies. Tools developed to root out in-banner video being sold as pre-roll can help address video size discrepancies.

“This all started with in-stream going to in-banner,” said Eric Kirtcheff, SVP of global ad operations at Essence. In both cases, buyers think they’re getting one video experience when they’re really getting another.

Essence favors Google’s detection systems, which will look at the average player size for an ad unit and also look at where the ad was placed on a page.

When Horizon Media uses Google, it verifies its ads displayed on medium or large players by looking at post-impression reporting, said Joseph Jung, head of trading strategy and associate director at Horizon.

With The Trade Desk, Horizon uses a pre-bid feature to avoid placements where the size of the video on the bid request doesn’t match the video’s render size, Jung said. The tool cuts down on the number of mismatches that the agency observes, but doesn’t eliminate them, since some discrepancies slip through the cracks.

The video mismatch problem is widespread: Jung often observes discrepancies where a unit like a “medium player size” shows up as a small player (less than 20% of the screen, according to Google) or in-banner video in the post-impression reporting.

Though time-consuming, examining video render size does catch video mismatches – including on the publishers mentioned in this article. A brand running a private marketplace on Mediavine last year noticed a discrepancy between the video size in bid requests and the ones that readers actually saw, and inquired about the issue, said CEO Eric Hochberger.

The buyer was the first and only brand that flagged the mismatch, Hochberger said.

Video ads that claim to run full screen are only one flavor of digital video inventory misrepresentation. Publishers and exchanges that want to create more video inventory are coming up with creative ways to insert video into written articles, and not all of those video ads pass the sniff test with buyers.

One exchange said that DSPs, including Google, increasingly ask exchanges to mark if video inventory is in-stream, in-banner, in-article, in-feed or “slider” ads, so their buyers can choose the video experience they want, or want to avoid.

Slider video ads, for example, often start big (when they’re measured by third parties) then shrink as readers scroll down the page. That important distinction can affect performance, and if buyers aren’t aware of the format and think they’re getting a big-screen ad the entire time, slider ads can feel misleading.

Since exchanges manage publishers, the buy side wants them to police video in the open marketplace. “Exchanges should be able to validate [publisher inventory] and ensure what’s being served is what’s being called,” Essence’s Kirtcheff said.

With a dearth of video inventory, exchanges aren’t strongly incentivized to stop selling misrepresented video ads, especially if their peers still sell them and buyers keep buying them. But exchanges who do set a high bar for their video inventory hope they’ll be rewarded by the growing number of savvy buyers in the marketplace.

Buyers can also be incentivized to buy bad video ads. If clients push them to hit a lower average CPM for their client, they’re going to buy cheaper video inventory in more marginal places.

Although ads.txt helped the video marketplace clean up, declaration fraud shows the industry still has room to improve its transparency and accountability. Marketers need to be on guard when buying digital video – and they must reward traders, tech platforms, exchanges and publishers that offer quality, not just cheap inventory.