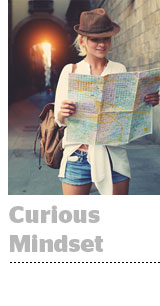 To reach people who like to stay in these hotels, Hilton knew it needed to connect not with a demographic, but with travelers who sought new experiences.

“In the old days, we would have looked at the age, income and marital status to come up with the target for Curio,” said Hilton’s global marketing VP, Stuart Foster. “Now, I tell our media agency our target is the curious traveler. There is nothing about that which is demographic. It’s really about the mindset.”

So Hilton wanted its Curio advertising to be interactive and spread through word of mouth. It decided to use social media influencers to support a paid social media campaign and pair that with a sponsored content program from Mashable. The campaign launched at the end of September and is still running.

The Mashable article focused on a gene for wanderlust – which one in five people carries – and the different types of curious travelers that exist. More than 33,000 people viewed the content, and 2,400 people shared the content.

The article ended with a call to action: It drove users to explore their own profile by taking the “Curiosity Quiz” on Hilton’s website. Someone who’s defined as a “spiritualist,” for example, will receive recommendations for Curio hotels that match their traveling style.

If Mashable offered the “loudspeaker” for the campaign to get the word out, the 30 influencers in the campaign provided the grassroots element, Foster said.

“Who you pick as your influencers is really important,” Foster said. Having influencers with large followings didn’t matter nearly as much as the influencers’ alignment with the brand, he said.

Compared to the average performance of those influencers’ sponsored posts on Instagram, the “Curious” content performed 3.2 times better. On Facebook, the content performed 4.5 times above the platform benchmark. Overall, the 30 influencers drove more than 60,000 engagements.

Besides choosing the right influencers, the quiz content flourished in a social media environment, Foster said.

“Quizzes are something that’s definitely growing in popularity across social media,” Foster observed. “It’s a simple tactic that allows customers to engage with content in a way that brings them into it.”

But the Mashable article drove the most people to the quiz. More than 25,000 people have taken the quiz.

Curio included paid social in the campaign. “To be visible and exposed in social media channels, you have to pay,” Foster said. But by focusing on a “tighter audience who is highly engaged,” like the followers within an influencer’s circle, Hilton got the engagement it wanted at an enviably low CPM.

Hilton has generated 3 million impressions since its late September launch at a sub-five-cent CPM.

But this is just the start for Curio. For this initial campaign, Hilton focused on the “dreaming and researching” stage of travel planning. “We have a complex business, and our marketing follows the customer journey, not just the traditional funnel,” Foster said.

Hilton’s future campaigns will extend the “Are You Curious?” messaging to later stages of the customer journey, like booking, pre-arrival and the hotel stay.

And Hilton is already coming up with ways to work the digital campaign’s messaging into the hotel experience. Cocktail napkins in the hotel encourage tipplers to take the quiz, and the staff’s nametags will be changed to add their travel personas, Foster said.

For this campaign, Hilton is paying the closest attention to the depth of engagement – comments and shares matter more than likes, for example. Hilton can also look at how many sales the campaign drives or how people interact with its booking portal after taking the quiz, for example.

But the most important high-level indicator for this campaign is how the marketing is affecting perception of the Curio brand.

The Curio brand is already growing awareness and consideration faster than it did prior to launch, Foster said, proof that its approach worked.

“This is a new way of marketing for us – trying to understand the mindset of our guests.”