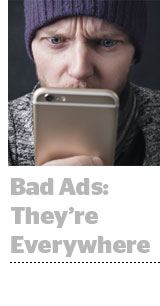 Bad ads have their run of the internet.

Twenty-eight percent of ads fail at least one of five key quality issues that slow down web pages and detract from the user experience, according to Ad Lightning.

Ad Lightning, which helps publishers find and report bad ads, analyzed 605,000 pieces of ad creative across 60 websites over 11 million impressions from October 2016 to this past January.

The bad ads either exceeded IAB-recommended file size, made too many network requests, used too much processing power, weren’t secure or used an intrusive format like in-banner video.

The ads in the sample averaged 1.1 megabytes, while the IAB suggests no more than 300 kilobytes per ad. And 10% of ads exceeded 5 megabytes, a size that will freeze many mobile browsers.

Many ads were also slow or intrusive. A third exceeded load time recommendations of 300 milliseconds. And 19% of in-banner video ads used autoplay.

Half of all scripts weren’t secure or were SSL noncompliant. Last year, both ads and sites made the switch from “http” to “https” to boost security, but some ads still aren’t complying with the changes.

Purch, a large programmatic publisher, deemed the findings “alarming,” according to Michael Hannon, VP of yield and revenue optimization. “As an industry trying to tackle things like ad blocking, overall latency, and simply providing the best user experience possible, this just makes it that much harder.”

Moore is a proponent of IAB standards and its Coalition for Better Ads, formed in September to address poor ad quality. But he says the industry suffers from what IAB President Randy Rothenberg called a “tragedy of the commons.”

A creative agency might pack a bit more into an ad in order to make it look cool, and tech partners along the way will pile on tracking scripts. With everyone skirting the rules, the ad will become heavy enough to slow down publishers’ sites and encourage the installation of ad blockers.

“This is an ecosystem-level issue that no one company alone is in the position to fix,” Moore said.

The data showed that some bad ads can die out through other means. Only 4% of ads in the Ad Lightning study used Flash, an intrusive format. Those ads won’t load anymore on Apple or Google Chrome browsers, incentivizing players to switch to other formats.

But absent a browser issuing an ultimatum, many publishers feel powerless to control bad ads that reflect poorly on them, not their partners. Although publishers can pre-screen ads for direct campaigns, for programmatic ads they have little more recourse than reporting those bad ads to the SSPs serving them.

Purch’s Hannon called for better identification and screening of bad ads: “There needs to be more automation in the pipes to more proactively identify and stop bad ads.  This should start on the buy side and continue throughout the pipes before ever making it to a publisher’s pages. ”

Moore pointed out yet another reason to take action: Bad ads put publishers at a disadvantage compared to Facebook, one of their main competitors.

“Facebook doesn’t allow ads like this to be introduced,” Moore said. “Everyone is competing against a competitor that has a clean ad load and doesn’t suffer from the same performance issues as the result.”